Season of the Witch: Get Ready for the Return of “Salem”

It's here just in time for Halloween.

Do you ever find yourself wishing there were some—any—scary shows about witches on TV? The last major “witch” show was American Horror Story: Coven, back in 2013, and that was just one season. Where in Satan’s name are all the TV witches?

Good news: you need look no further than Salem, a somewhat under-the-radar show that’s been terrifying viewers since 2014. The premise is simple enough: what if there actually were witches back in 17th century Salem, Massachusetts, and what if they were behind the panic and paranoia that led to the infamous witch trials?

This horror-drama is about to enter its third season, which premiers on WGN America on November 2, during Halloween week. Check out the trailer, but be warned: it contains spoilers for seasons 1 and 2.

But what if you’re new to this bewitching horror drama? Well, you’re in luck! You can binge on the first two seasons on Netflix right now, in anticipation of the upcoming third season.

Speaking of the new season, The Lineup was lucky enough to attend the Salem pressroom at New York Comic Con this past week. There to answer questions about season 3 and the show in general were Janet Montgomery, who plays Mary Sibley, Salem’s head witch; Shane West, who plays Mary’s star-crossed love interest Captain John Alden; and co-creators of the series, Adam Simon and Brannon Braga.

So: what makes Salem worth watching?

“It’s not typical genre horror,” said Simon. “It’s not the monsters that come from already existent comic books and movies and things like that. It’s much more a turn to the monsters of history.”

“I feel like it’s really the only thing being done that way,” West added. “When you’re taking this truly amazing and tragic period of American history, and you flip it, essentially, and say, well what if the witches were real: would they run the witch trials themselves? … it’s such a unique idea from the get-go.” 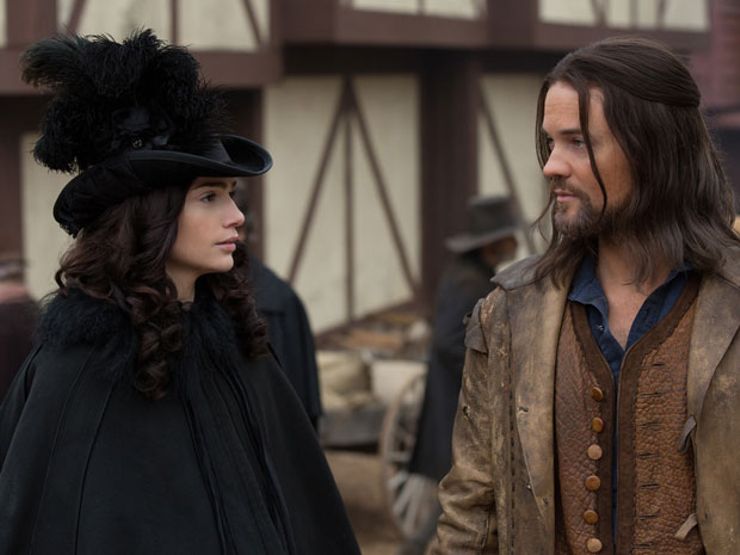 “A lot of the horror elements and bizarre supernatural events we took directly from the Salem witch trial transcripts,” said Braga. “There’s some stuff on the show, some of the greatest stuff … that’s from the trials. I can’t think of anything more strange in any horror movie I’ve seen.”

Montgomery continued, “I think you watch scripted television to be transported somewhere else … when a show does it right, or a movie does it right, you are transported, and you feel invested in it…you don’t question whether witches are real … you’re just transported by the show.”

“Salem” premiers on November 2 at 9 p.m, EST on WGN America. Watch seasons 1 and 2 on Netflix now.