A familiar face shines new light onto the brutal murder of Ecks Chinsky and Sherl almost unravels the mystery when a jazz parade stirs up an explosive scene.

Welcome to episode 5 of our interactive serial, “The Murder Chronicles: A New Orleans Murder Mystery.” In this installment, a familiar face from episode 1 shines new light onto the brutal murder of Ecks Chinsky. Sherl is close to unraveling the mystery, when a wild brass band parade stirs up an explosive scene.

New to the series? Click here to find out more about the project and catch up on past episodes. Share your thoughts about the case on our Facebook page, via email, or in the comments section below. Then tune in next week to see if your feedback reshaped the storyline.

One mystery delivered in twelve weekly installments. Where do the clues to this murder lead? You decide. 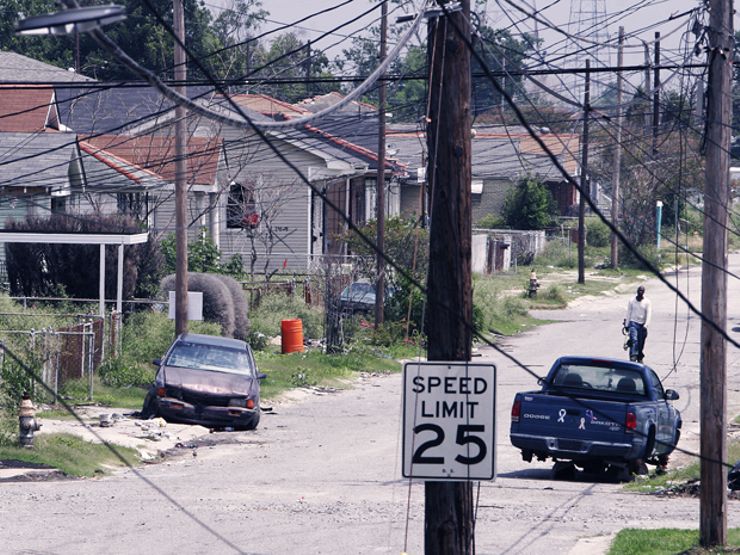 Tragic hooker, raped and strangled, her body shoved under some rotted porch boards.

Elderly weed dealer shot in the face out taking a stroll on a Saturday morning.

Two young fellows stabbed to death in an epic of struggle in somebody’s drive, one of them dying right there in the oil, the other one making it half-a-block further before crawling into a tipped Port-o-John where they found him sprawled upright, knife still in his fist.

Amelia Kent, the neutral ground. Two slugs to the chest and one more to the head.

The only suspects: two black males in white skirt-shirts on racer bikes.

The only reminder: a tinfoil bouquet in the small, weeded patch that had soaked up her blood.

We stood in front of Ecks’ house.

The street was exactly like Lil had described on the night she had gone to get bourbon and takeout. From where we were standing you wouldn’t have known that a fifty-yard stretch could claim so many lives.

Shotgun houses, close upon. Some junk in the storm drains, but that was most zipcodes. Just one blighted house left to stand on the street – the one where the dead prostitute had been bundled – with bulldozer rumors on everyone’s lips.

Some guys on the corner were stooping it hard. Homegrown in the air, beer bottles, sub-woofers. Going up: 5th Ward Weebie, some indistinct Bounce. One of the guys not engaged on the stoop was driving an ATV drinking a tallboy, the partygoers toasting him when he would tear around the block.

The kid with the phone who I’d palavered with about Ecks and so forth on the night of the murder was in the same place I had seen him before: scrunched beneath the motion light across the street from Ecks’ house. That previous evening the 10 p.m. shadows had softened his face, making him appear younger, but I now I realized he was twelve or thirteen, which itself is a far cry from ten or eleven.

I crossed the street to where he sat.

He was wearing a Reggie Bush jersey and Jordans.

He looked at my feet and then back at his phone. He had moved from Drop 7 to Dead Trigger 2.

“Where you live at?”

“Intersection of Down…and the Way…” I mock-noted, but the kid didn’t look at me, glued to his phone. “If you don’t live here then who does?” 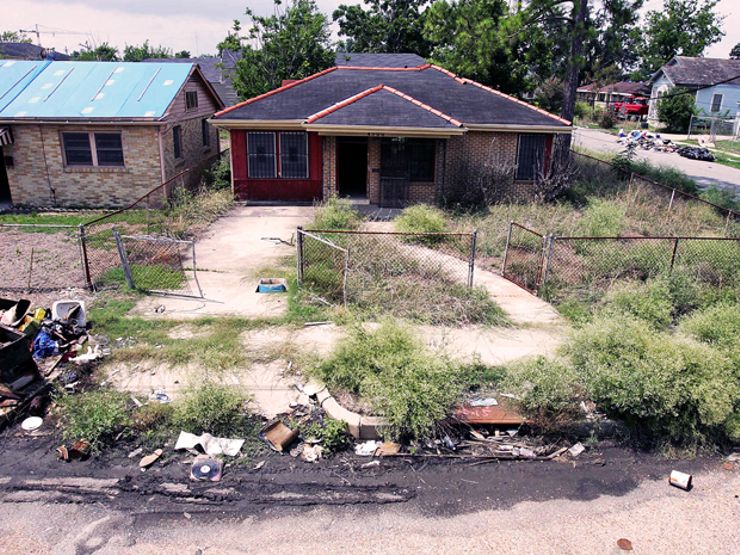 “And they call her Loretta.”

“Your extra-special place,” I said. “Where you come to, you know, get away from it all.”

I smiled at him big, and he smiled back a little.

He was almost this pretty kid with dark black skin and long-lashed eyes. The set of his mouth had a gingerness to it, as though something too true to be shared with the world were always hovering on his lips.

“I knew your voice,” the kid said now. “Before I looked up, I could tell it was you.”

“Ain’t never been out there before.”

All right, so I hadn’t been born out that way.

But I was born in Mobile and that was Deep South. I wanted to plant in his mind I was local but not so much it raised his hackles. That stuff was important to kids of his age. When a session of telephone started among them that featured the tale of the white boy reporter, I wanted it leading to more than a dial tone.

“This here the Treme,” said Toussaint. “You surprised?”

“I thought that Toussaint was from Gert Town,” I said.

“Whatever,” he said and went back to his phone.

“So Ecks couldn’t shut the fuck up about what?”

He finished mowing down some zombies. A headshot made the screen turn red and he froze it that way and looked up, his eyes squinted. “Ain’t nobody trying to talk about that.”

He started to put his phone away and bend his knees to scamper off, but I knocked myself down to his level and crouched. He flinched and got this cornered look; I think that he thought I was hedging him in.

“Little brother, I’m sorry.” I held up my hands. “I know he was onto the Kent woman’s murder. On the record, I don’t need to hear it from you.” I pointed at the stoop of dudes. “Maybe want to introduce me?”

“Ain’t got time for that right now.”

But Toussaint pointed down the block. 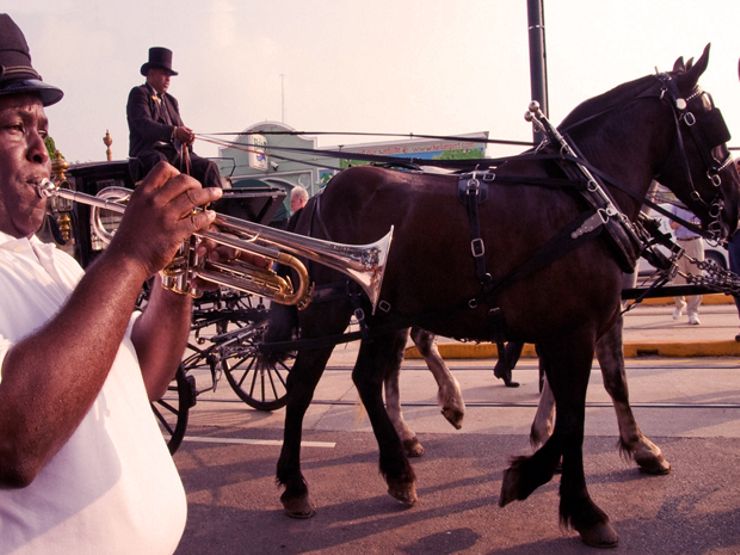 A slow-moving NOPD car came first, because every parade in this town had its escort. Next would come the ragged drunks, the horn-players, bead-flingers and skeleton-faces, the parasol-spinning grand dames of the South and the bare-chested hustlers with coolers of beer – pretty much anyone who had thought to glom on as the second line wended its way from the park. Those guys on the stoop were pre-gaming, of course. As soon as it reached them, they’d be in it, too.

I remembered what Ecks had said to Lil before she’d gone out for that ominous takeout: They say evil hides, but they’re wrong. It parades.

As Toussaint had said, we were in the Treme. Second lines and jazz funerals were commonplace here.

Was that what Ecks had meant to say, that the Kent woman’s murder was jazzland related?

I pictured a man in a tilted fedora, his face shadowed below the brim. He loomed in my mind holding hands with a woman who was wearing a flapper’s dress, tasseled and tight, but she was one of Bellocq’s brides or the work of his penitent Jesus-freak brother.

Her face, like her sweetheart’s, was shrouded in darkness.

“Got to get going,” Toussaint started saying. “My big brother Cleveland, he playing the tuba.”

“The best medicine that there is at your age.”

I said: “A big brother. How old did you say Cleveland was?”

“So that makes him a senior?”

But Toussaint didn’t answer. “I got to get going. You mind yourself, Mister.”

“Hey, Toussaint.” I was still kneeling close to him, smiling, “Just humor me for one more second.”

Reflexively, he scanned his phone, then he stuffed it away in his gym shorts. “I’m listening.”

“Anybody you know wanted Ecks non-existent? Someone between here the French Quarter, maybe? Maybe one of those cats on the stoop over there?” 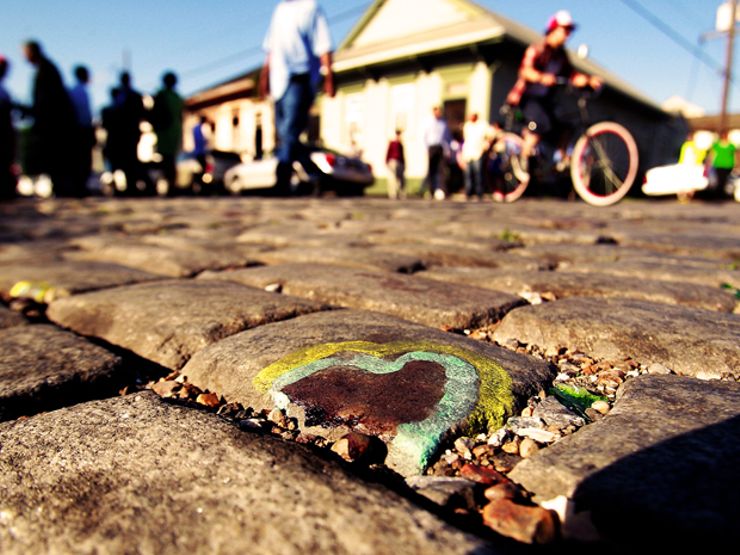 “Them cats be selling that he-ro-ayne, mister.” Toussaint said it quickly, but then looked abashed. “Ain’t looking to fuck with the NOPD by stabbing a white boy to death on his couch. “

I nodded slowly; he was right.

“And anyway,” he shook his head, “that white boy was stupid, but he was okay.”

“He would set in with folks. Didn’t talk your head off but he liked to say hey. And he was tore up what went down with the lady – whatever her name was, the one that got shot? You know the story: asking folks. Didn’t nobody want to say shit about nothing. That’s how it’s going down out here. Zip your lips, protect your neck. You feel me, he wasn’t from here,” said Toussaint.

“You said he knew your brother Cleveland?”

“Knew a lot of the brothers that lived on this block.”

“He ever make you feel…uneasy?”

Toussaint considered the words I was saying. “Oh.” He grinned and gulped. “Like that. Nah, man, nah, he wasn’t – shit. You were friends with him, really, and that’s what you’re asking?”

“Parade is almost here,” I said. “Stay one minute more and we’ll watch it together.”

He did look antsy at this point and not just from wanting to see the parade. It was almost as though he had grown terrified of what me and him standing there on the street would mean once the neighborhood gathered around us. He peered at Rob across the way and then he took off down the block.

I sauntered back to Cajun Rob, who was watching Toussaint and the coming parade. 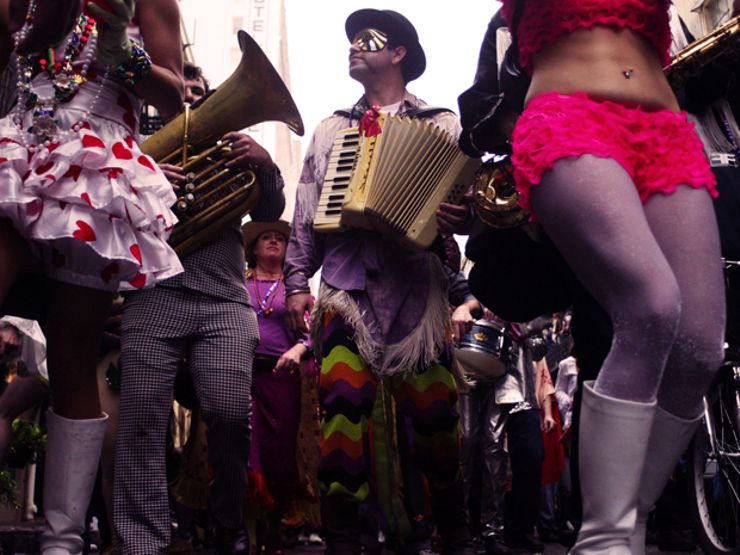 The front line was a block away. You always heard the brass band first. The trumpet and tuba and horns clearing yardage, slowly blaring into being. But what you saw first were the jags of the crowd, the spikes and the lulls of the characters in it.

A middle-aged man sweating full devil makeup, a David Lee Roth-mane of hair down his back. A woman with a champagne flute who churned in the midst of a debutante’s gown, its ribbons and crinolines flashing around her. A couple of kids in the spectral headdresses of Mardi Gras Indians, whooping it up. And then there were those who were barely upright they’d had so many drinks on the go as they marched and they all had a pickled intensity to them as though they paraded in some kind of trance.

I started idly taking pictures. Got a couple decent shots.

“Your boy is coming up in back,” I heard Rob yelling in my ear and sure enough there was Toussaint, dancing crazy-armed sasquatch in front of the drummers, a rainbow-feathered tomahawk extended high above his head.

The horns passed in a blaze of sound. The fierceness of them stunned the air.

I looked for somebody who looked like Toussaint among the tubas as they passed in hopes of catching sight of Cleveland, but it happened too fast to pick out the nuances. Some of them were older guys, some of them wore high school colors.

There was a falter in the crowd when one of the horn players botched the formation. The wake of the second line bunched up around him, people sidestepping and yelling: “Swerve, baby!”

Cajun Rob said: “Watcha light.” Or something like that. 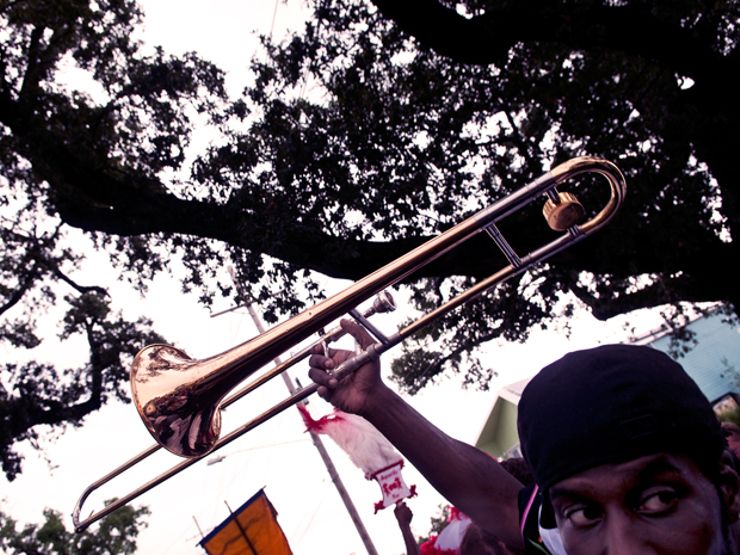 But the crowd drowned him out.

Later, he told me he’d said, “Watch the right,” where one of the two tuba players had stopped and was rooting erratically under his shirt.

I couldn’t even see his face. Nor the back of his head; he was wearing a hat.

All that I saw was the gun in his hand: silver snubnose .45.

The way he raised it, clumsily, stopping a moment to mess with the safety and pressing it into the base of the skull of the trombonist marching ahead pulled the trigger.