Haunting the riverbanks of Loveland are sightings of a mysterious creature with leathery skin and a gaping mouth.

Bigfoot, Mothman, the Loch Ness Monster—cryptids come in all shapes and sizes. Some are big like Nessie, and some are small like a faery or pukwudgie. Unique attributes and physical characteristics make them each as different as snowflakes.

Ohio has its fair share of these “hidden” creatures—the Dogman, the Melonheads, the Lake Erie Monster (Bessie), and the Ohio Grassman (the state’s resident Sasquatch-type.) But there’s one cryptid unique to Ohio—a creature that’s almost never been seen outside the greater Cincinnati area—The Loveland Frog.

As a young girl, I remember hearing the legend of a weird humanoid-amphibian, mostly at sleep-away camp, where ghost stories and tall tales festered in the late summer heat. The Loveland Frog was a mini-monster—not enormous, but still freakishly strange and abnormally sized for a pond dweller. It wasn’t something I cared to come across during an afternoon hike.

RELATED: SPIRIT OF THE SWAMP: THE EERIE LEGEND OF THE PUKWUDGIE

The Loveland Frog is similar to its normal frog cousins but about 400 times the size. It walks bipedally, upright on two legs. It’s a man-frog hybrid, with some amphibian and some human characteristics. It’s said to range between three and five feet tall, about the size of a large dog or small person. The Loveland Frog is definitely not your run-of-the-mill Spring Peeper.

Legends about the caecilian creature date back centuries, to a time before white men settled the shores of the Little Miami River. In the last years of the 17th century, the native Twightwee people warned early French explorers about a river demon they called the Shawnahooc.

The terrifying water devil had features of both a frog and a man, minus a nose or any sort of hair. Its skin was dark and bumpy, with a wrinkled yet slimy appearance. The Shawnahooc guarded the river’s banks, chasing away any and all who stumbled uninvited onto its territory. The creature was thought to be immortal and if injured, it would simply sink back into the cool waters of the Little Miami.

The Shawnahooc legend was passed down from generation to generation. The residents of the area (later known as Loveland) dubbed the cryptid “The Loveland Frog.” Modern day reports can be traced back as far as the early 1920s, but the most intriguing eyewitness account appeared in 1955. 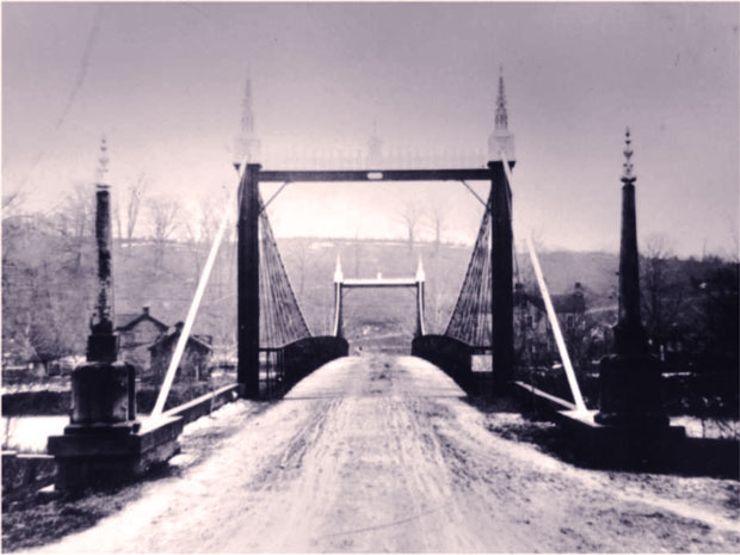 The Branch Hill Bridge of Loveland

It was an early spring morning, after midnight but before dawn. A weary business traveller was heading through the Loveland area when a strange sight stopped him in his tracks. Before him on a bridge he saw three unusual creatures. He strained his eyes, mystified by the bizarre trio. They had a slightly human appearance, but their skin took on a strange greenish hue. Their eyes and mouths were enormously large and “frog-like.”

The creatures were hairless and smelled of almonds and alfalfa. The bewildered man swore they each held some sort of sparking wand in their webbed hands, waving it madly above their frog-like heads. That was all the detail he could give before he drove madly away shrieking with fear.

RELATED: THE STRANGE CASE OF THE MELONHEADS

Another well-known anecdote about the Loveland Frog came from reliable sources—two Clermont County police officers. In March of 1972, officer Ray Shockey and his partner Mark Mathews came across something incredibly strange during an evening patrol. As their cruiser approached Twightwee Road, they saw what they believed to be an injured or dead animal lying on the ground in front of them. The men approached with caution.

They were shocked when the prostrate creature suddenly jumped up and bounded across the road in front of their patrol car. The headlights illuminated the ominous being as it moved, giving the men a good look at it. Shockey and Mathews could not believe their eyes.

Both described the same thing. The weird creature was about three to five feet tall, with leathery skin and the face of a frog. It had a giant gaping mouth and no discernible nose.

In a matter of seconds, the creature was gone—vanishing into the night. The only evidence that remained of the frogman was some long scrape marks on the guardrail leading from the road to the river. 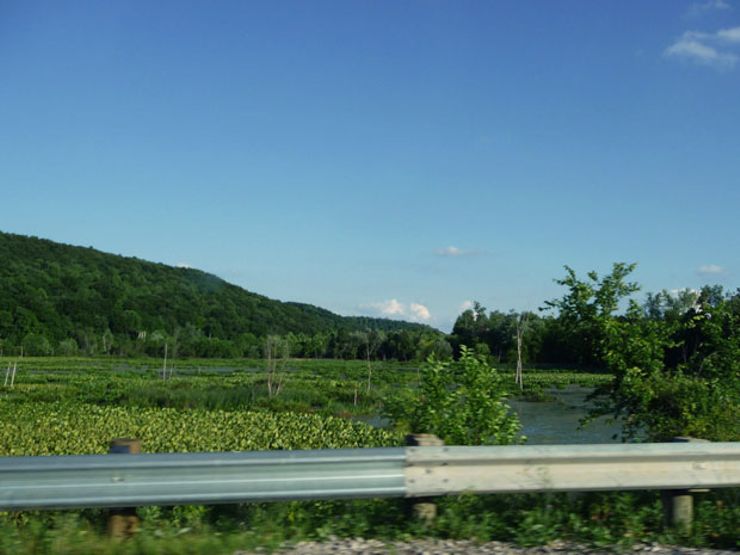 Less than a month later, Mathews again encountered the giant frogman. At first he thought it was just another animal on the side of the road, but he approached the site apprehensively. He carefully pulled up his car alongside the creature. The monster stood on two legs, turned and stared at the officer, then slowly stepped over the guardrail before disappearing into the river. Mathews claimed he pulled his gun and shot at the bizarre beast before it vanished into the darkness.

It’s highly unusual for an officer of the law to go on record with something like this. Belief in aliens, ghosts, or human-frog creatures is tantamount to career suicide. It opens the door to attacks on one’s sanity and credibility. Shockey and Mathews fell victim to this. People thought they were nuts.

But the sightings kept pouring in. Citizens who lived in and around Loveland reported fleeting encounters with the mysterious frogman. The town monster had people talking, authorities worried, and teenagers out looking. It became the local urban legend, a game of sorts. But for Shockey and Mathews things turned ugly. They were mocked, laughed at, completely ridiculed. No one seemed to believe them.

RELATED: A CREATURE STALKS THESE WOODS…

Mathews ended up recanting his story, tired of defending the incident and his reputation. The two policemen eventually refused to talk about what they saw that night to anyone except each other.

Other sightings of the Loveland Frog came from area farmers. One spotted a large reptilian creature with large circular eyes. Its skin was a pale greenish-grey and its huge mouth was filled with sharp pointy teeth. Luckily, the creature didn’t attack the farmer, but quietly slipped away, heading back toward the waters’ edge from whence it came.

Years later, Ray Shockey apparently had a change of heart. He approached the Loveland town council in an attempt to get them to recognize the Loveland Frog as sort of a city mascot and capitalize on the notoriety (and revenue) it could bring. His plea fell on deaf ears and his idea was dismissed. 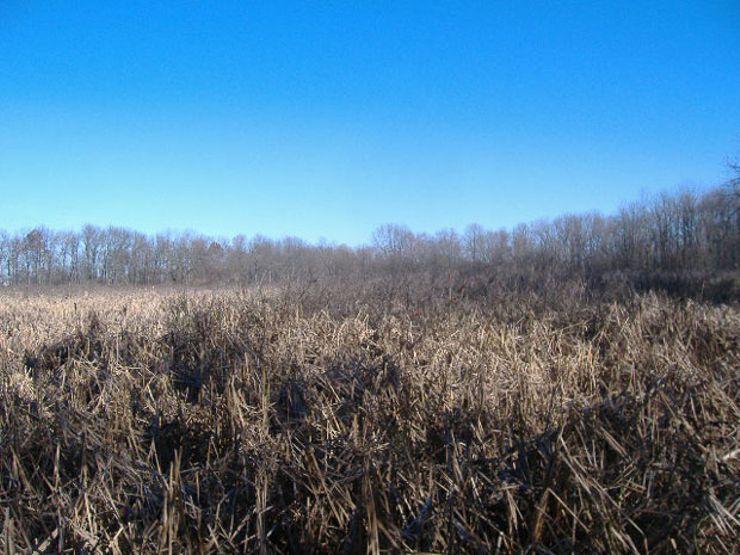 A marshland in Ohio’s Pickaway County, an hour and a half outside of Loveland

In recent years, additional accounts of the Loveland Frog and creatures with similar characteristics have surfaced on the web. YouTube even had some fuzzy video footage of a large frog-like creature that appears to be walking on two legs, supposedly shot near the Little Miami River.

Another recent encounter comes from a woman who claims she was attacked by a reptilian creature while swimming in the Ohio River near Evansville, Indiana. The frogman grabbed her by the legs and dragged her deep under the water. The panicked swimmer managed to kick herself free from the monster with help from a bystander who witnessed her distress. The attack left behind tears and scratches, as well as an unusual green palm print that stained her leg for days.

This Indiana location isn’t exactly close to Loveland, so it could be unrelated…or maybe there’s an “Evansville Amphibian” lurking out there as well.

Special thanks to author and fellow Ohioan James Renner for the inspiration to write this article. His book, It Came from Ohio, is a great source of information on Ohio cryptids. Thanks for the nightmares, James!