The Deadly Legend of the Lost Dutchman Mine

In the unforgiving landscape of the American Southwest, one mysterious gold mine has lured numerous treasure hunters to their deaths.

In this technological age of satellite mapping it’s rare for any stone to remain unturned. Yet in the mysterious mountains of the American Southwest, there’s one site your GPS will never be able to find.

The legend of the Lost Dutchman Mine has haunted treasure hunters for hundreds of years. Located somewhere in the unforgiving deserts east of Phoenix, Arizona, the fabled site attracted 8,000 intrepid seekers a year at its peak. Many have perished on this dangerous—and some say, cursed—quest for wealth.

The tale of the mine is so tangled with pioneer lore that its history is as twisted as the path to get there. Pierpont C. Bicknell is regarded as one of the earliest major historians of the mine. His landmark 1895 article in the San Francisco Chronicle first revealed the legend to a national audience, though it’s believed he took many liberties with the telling of the tale.

The journey to the glittering mine begins in the wilderness of the Superstition Mountains, which in actuality is a treacherous stretch of cliffs, bluffs, and plateaus. While seasoned hikers can still trek these steep trails, you can no longer search for gold—the U.S. Department of Agriculture made all forms of mineral entry illegal in the wilderness area in 1983. 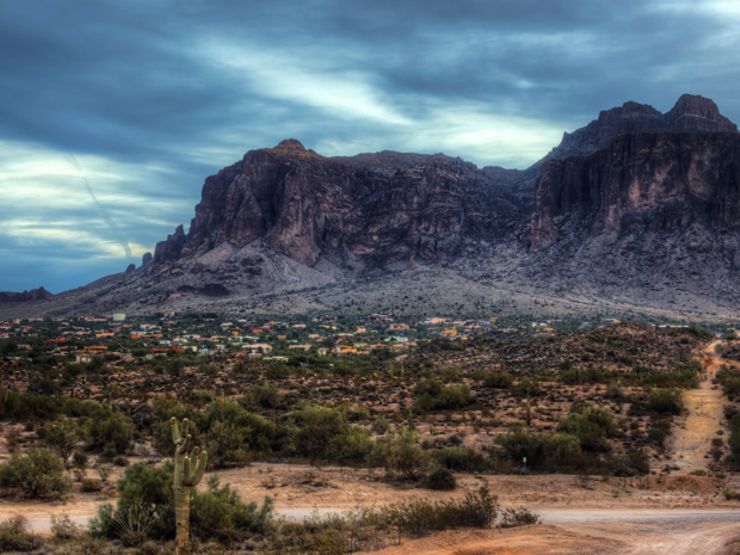 The earliest mention of wealth hidden within the mountains comes from the Apache Indians. The natives believed a Thunder God protected the area and brought death to those who soiled its sacred ground. In 1540, Spanish conquistadors led by Francisco Vasquez de Coronado marched north from Mexico in search of the Seven Golden Cities of Cibola. Apaches apparently told de Coronado of the Superstition Mountains and their rumored gold, though they offered no help in finding it.

Word spread through the camp. Soon, men began disappearing in the night, striking out on their own expeditions. When the missing treasure hunters turned up, all that remained were mutilated bodies.

Subsequent explorers avoided the Superstition Mountains, frightened by its dark reputation. It would be centuries before one legendary treasure hunter finally struck pay dirt. In 1845 or 1847 (depending on the source), a wealthy Mexican man named Don Miguel Peralta ventured into the Superstition wilderness and hit it big. The miner and his men reportedly shipped millions of pesos in gold back to Mexico.

The Apaches resented Peralta and planned to drive him out. Sensing a raid, Peralta hastily buried the mine entrance and plotted his escape from the Superstition Mountains. 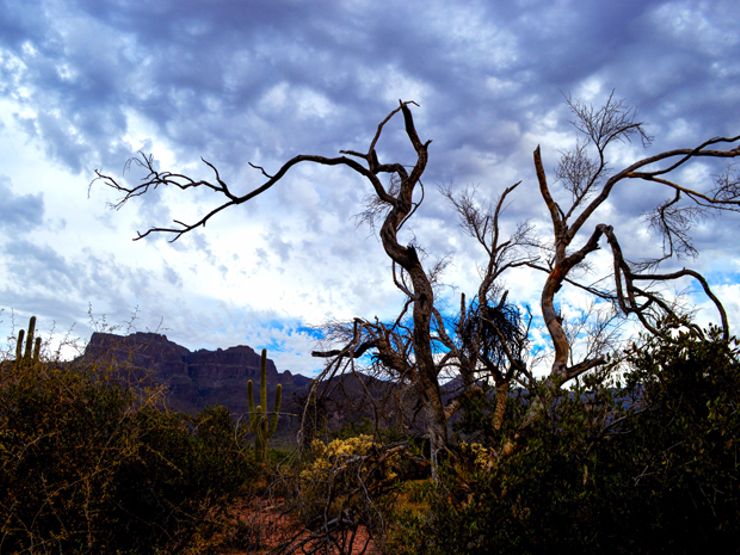 Alas, while Peralta succeeded in burying the mine, he failed to survive the Apaches. He and his crew were attacked, and their mules, loaded with gold, scattered and tumbled down the steep cliffs in the melee, taking their riches with them. Seekers would later search for the mule carcasses strapped with treasure in the “Gold Fields” below.

Historians debate the veracity of the Peralta tale—in his book Tales of the Superstitions: The Origins of the Lost Dutchman’s Legend, writer Robert Blair asserts the entire episode was an invention to expand the mine’s mystery. Nevertheless, a group of skeletons were apparently found in the Superstition Mountains, suggesting some sort of battle had occurred.

Pioneer lore has it that the mine’s riches were unearthed again in 1870, by a friend of the Apaches. Dr. Abraham Thorne was an army medic who worked at Fort McDowell due north of Phoenix, where an Indian reservation had recently been established. Tribal leaders respected his work and offered to lead him—blindfolded—to the treasures of the Superstition Mountains.

The group traveled on horseback for 20 miles. When the Apaches finally removed Thorne’s blindfold, the good doctor stood before a pile of gold—possibly a lost haul from the Peralta raid. He was allowed to bring back as much as he could carry. 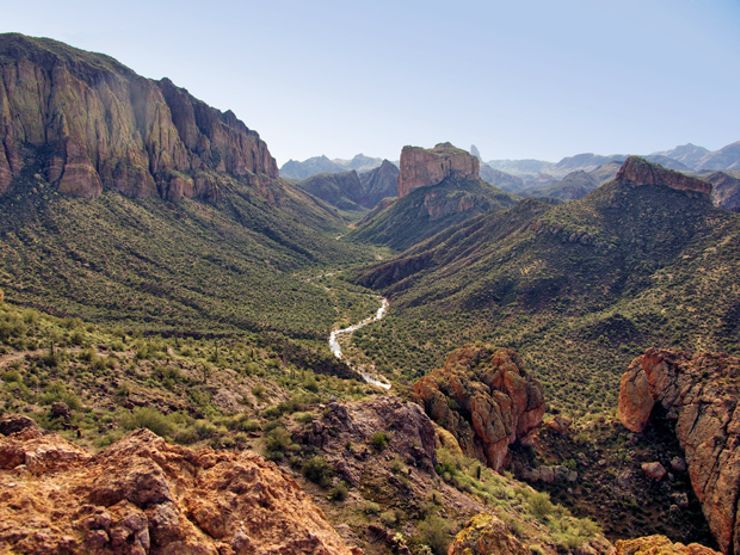 Of course, the most popular tale connected to the mine is that of “the Dutchman” himself. The man was Jacob Waltz (sometimes written as Walz), who actually hailed from Germany. He arrived in America in 1845 and was captivated by tales of striking it rich out west. In 1868, he set up camp outside Phoenix, where he tirelessly searched the desert mountains for gold.

It was here, while homesteading in the Rio Satillo Valley on the northern side of the Superstition Mountains, that he first heard tales of ancient Apache wealth hidden in the area.

Waltz was hooked. Some accounts add a second man, Jacob Weiser, who became Waltz’s treasure-hunting partner during this period. After many years lost in the Superstition Mountains, the pair finally reemerged in Phoenix—where they paid their bar tabs with pure gold.

Speculation swirled as to how Waltz actually found the mine. Some say it was by accident; others claimed Waltz and Weiser stumbled across two men who had already unearthed the gold, and murdered them in cold blood. Still others believed an heir of the fabled Don Miguel Peralta provide Waltz with a secret map that pointed the way to the mine. 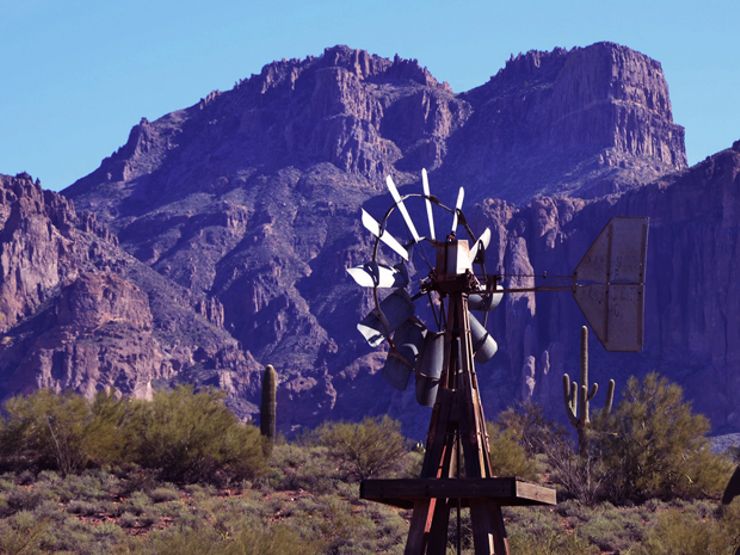 Jacob Weiser disappeared from the story shortly thereafter. Tales told of the Apaches killing him—or Waltz, who grew tired of splitting the wealth. Waltz, meanwhile, lived a long and prosperous life. He popped in and out of town, his pockets stuffed with gold nuggets. The miner refused to give a straight answer as to truth behind the mine, and shook off those who tried to cajole him back into the rugged landscape.

That is, until Waltz met Julia Thomas, a 29-year-old baker who lived in Phoenix. The woman kindly took in the old prospector toward the end of his life, after a flood displaced him from his home. Waltz apparently dropped tantalizing clues as to the whereabouts of the mine as he lay dying at Thomas’ farm.

Shortly after Waltz’s death on October 25, 1891, Thomas set out into the Superstition Mountains, and became one of the first official treasure hunters of “the Lost Dutchman Mine.” While she never struck gold, many historians believe she shared her experiences with one Pierpont C. Bicknell, whose 1895 article sparked the Dutchman craze.

Since then, numerous books and articles have been penned about this alluring legend—including Jim Barks’ and Sims Ely’s The Lost Dutchman Mine from 1953, in which the pair chronicle their 25 year search for the fabled site.

Yet instead of shedding light on the topic, the mystery of the Lost Dutchman Mine has only deepened—and darkened. 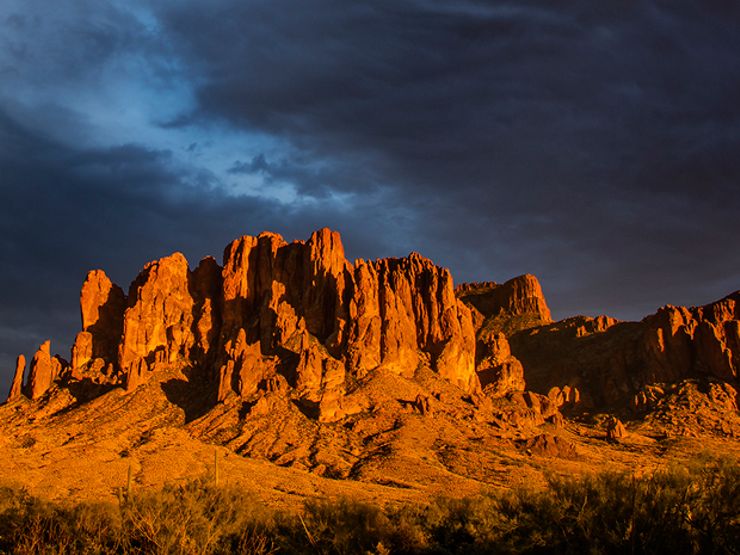 Numerous unexplained deaths have occurred since Waltz uttered his last words in 1891. Many believe the spirit of the old miner haunts anyone who dares search for his treasure. Others believe it’s the lost souls of unsuccessful seekers who curse the harsh land of the Superstition Mountains. Or could it be the Apache Indians and their Thunder God, continuing to guard their mine hundreds of years later?

Beware all who enter, for you may never return.