Kray Twins: The Killer Truth Behind the Criminal Legends

The real-life tale behind these infamous twin criminals comes spattered in blood.

There’s a new mob flick called Legend headed into theaters, and it stars master class actor Tom Hardy as both twin English gangsters Reggie (left) and Ronnie Kray. The film is based on John Pearson’s killer true crime book, The Profession of Violence. Technically, you could just see the thing without any prior knowledge of Swinging London’s golden boys of crime and come out as a fan. But, then, what are we here for?

Allow us to introduce you to the real gangland legends lurking behind the silver screen.

RELATED: LUCKY LUCIANO: THE MAKING OF A MOBSTER

As boys in 1940s England, Ronald and Reginald Kray were wartime evacuees. They called Bethnal Green home, had a dog named Freda, an older brother named Charlie, and a sister who died as a baby.

No strangers to malfeasance, the two got started early, racking up a lengthy rap sheet before they could even order a pint. Violence, gang activity, and running from the law were all just after-school activities for the twins. They even knocked a police constable around and were briefly imprisoned in the Tower of London—two of the last inmates to be locked up in the infamous facility. 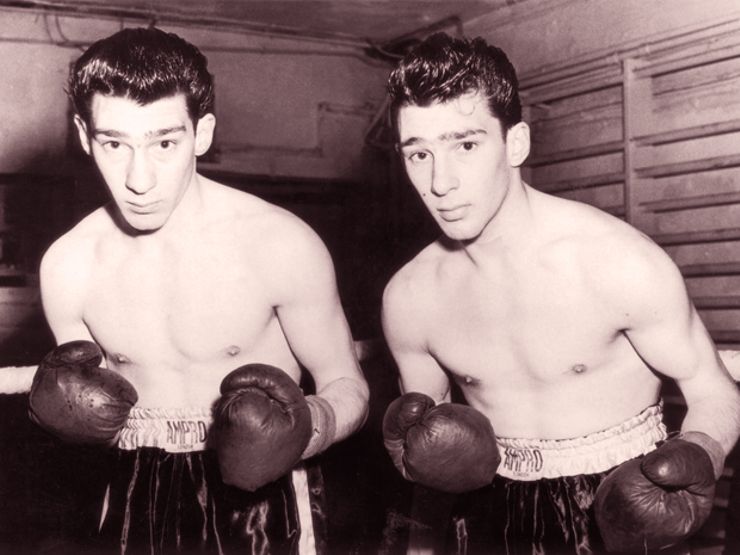 Young Ronnie (left) and Reggie (right) pose in the boxing ring, circa 1952

In the early 1950s, the Kray twins displayed a talent for boxing as young men. Reggie was a particularly potent force in the ring. Yet a life of crime kept calling them back. So a life of crime it was.

Reggie and Ronnie established their gang, which they called the Firm. They bought a rundown snooker club, set up several protection rackets, and worked on growing their legacy as the most dangerous men in London’s East End. Of course, to do that, robberies, hijacking, and firebombing were in order. By the 1960s, Ronnie and Reggie were the proud owners of several ritzy nightclubs, had achieved flash-bulb status, and were rubbing elbows with power players, politicians, and Hollywood’s biggest stars—including Barbara Windsor, Frank Sinatra, and Judy Garland. All the while, Reggie and Ronnie kept their criminal mischief (mostly) hush-hush, hiding their felonious skeletons behind their “legitimate businesses” and charming grins. 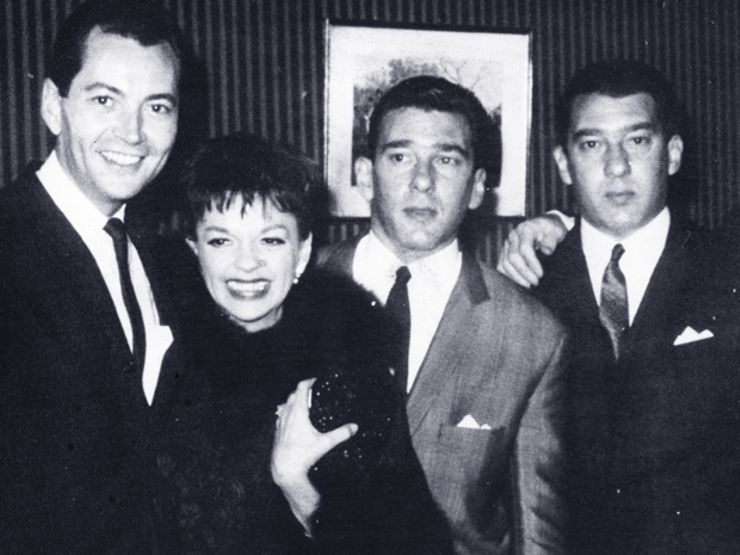 The Kray twins pose with Judy Garland circa 1964

Glamorous as they were, trouble loomed in the shadows. Ronnie was diagnosed as a paranoid schizophrenic in 1959, a disorder that came to haunt him in the coming years. After helping a criminal associate named Frank “The Mad Axeman” Mitchell escape prison in December 1966, the brothers struggled to keep their newly freed friend under control and allegedly had him killed. Ronnie had a thing for orgies mixed with politics and carried on an affair with Tory peer Lord Boothby. And while Ronnie was known as “The Queen Mother” in London’s gay underworld, they both had alleged bisexual tendencies. Reggie married a woman named Frances Shea in 1965, though the tumultuous relationship allegedly involved Reggie’s attempted rape of his wife’s brother.

RELATED: WHITEY BULGER AND THE BRUTAL DEATH OF DEBRA DAVIS

Indeed, while Ronnie was a diagnosed schizophrenic, Reggie was just as unstable. Case in point: Knowing his wife was afraid of blood, he cut his hand open and bled over her as she slept. It’s a bizarre yarn that Pearson explores in depth in his book, and Legend reframes as a dark episode of domestic violence. The film would have you believe Reggie beat and raped his wife. Yet there’s very little proof of physical abuse, as Frances insisted Reggie was never violent with her while they were together. Nevertheless, the marriage quickly fell apart, and Shea later committed suicide in 1967. 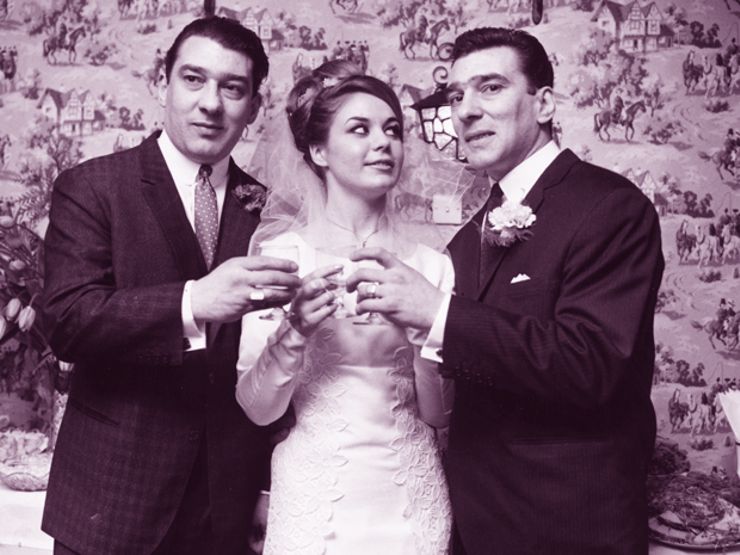 They Krays’ glory days were waning, and two acts of brutality would soon shatter their empire forever. In March 1966, Ronnie, his mental condition deteriorating, shot George Cornell in the face at a pub. Cornell was an associate of the Richardsons, the Firm’s rival gang. The slaying triggered a gangland war that led to additional violence. Then, in October 1967, Reggie went to town on Firm gang member Jack “the Hat” McVitie with a carving knife after he failed to follow through on a hit. Technically, Ronnie took part in that one, too. The twins lured McVitie to a “party.” After Reggie’s gun failed to fire, Ronnie held McVitie down, while Reggie stabbed him repeatedly in the face and throat. The film tells a different story there, too—depicting Reggie as the sole killer and the McVitie murder an example of the fraying connection between the brothers. 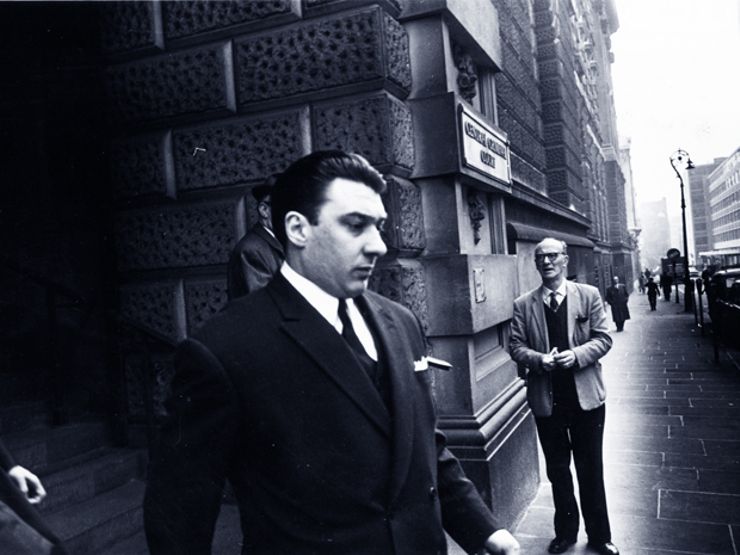 At age 35, the twins were arrested for the above killing by one Inspector Leonard “Nipper” Read. They were convicted and put away for life. Their liaison to the outside, Maureen Flanagan, the sister they never had, kept them sane with the comforts of the free world (read: Player’s ciggies and pork pies).

As for prison life, Ronnie had a better go of it. After their conviction, the twins were separated, and Ronnie eventually ended up at Broadmoor because of his disorder. Ronnie enjoyed his roomier digs, reveling in bagels and lox and designer wear delivered by Flanagan.

Reggie, got the, well, other end of the stick. Prison-hopping and twin separation led to depression and attempted suicide. Eventually, however, he acclimated to his barbed-wired surroundings—and even turned a profit. In 1985, it was discovered that the Kray twins, while incarcerated in separate facilities, had been running a profitable bodyguard and protection business for Hollywood celebrities. Documents released from the investigation revealed that none other than Frank Sinatra had hired bodyguards from the operation.

On March 17th, 1995, Ronnie passed away at age 61 of a heart attack while serving out his sentence. Reggie was briefly released on compassionate grounds in late 2000, after it was discovered he had bladder cancer. The last Kray lived out the rest of his days in a hotel suite before succumbing to his illness on October 1st, 2000. He was laid to rest beside his brother ten days later, in London’s Chingford Mount Cemetery. 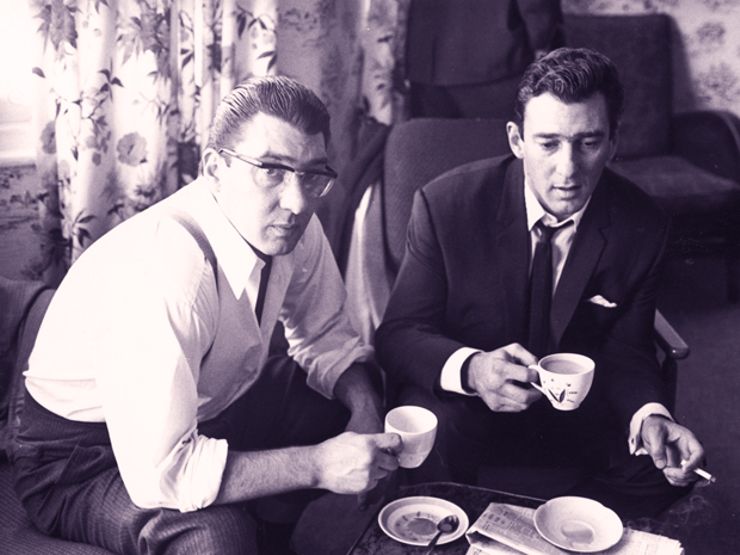 Two everyday ends to one very magnetic shared existence—ultimately, the stuff of legend.