John Christie was hanged for the murder of his wife ... but she was just one of his victims.

Though John Christie was hanged for the murder of his wife in 1953, she was only one of his eight known victims, and some believe that he killed many more.

Born in Yorkshire 1899, Christie joined the army at the age of 17 and fought in the First World War, where he was injured by mustard gas in 1918. He spent a month in a military hospital and would later claim that the attack left him blind and mute for three years, though there is no record of his blindness. As for his muteness, it couldn’t have lasted for long; he was re-admitted to active duty shortly thereafter. Nevertheless, Christie’s vocal chords were clearly damaged by the gas attack; he never spoke much above a whisper for the rest of his life.

Christie married Ethel Simpson in 1920, and the two eventually moved into a “squalid” rented flat at 10 Rillington Place in London. Having struggled with impotence throughout his life, Christie is said to have been able to perform sexually only with prostitutes. Before his murder spree began, Christie was arrested for and convicted of a variety of petty crimes, including stealing postal orders, assaulting a prostitute, and even stealing the car of a priest.

When war once more broke out in Europe, Christie got a job as a special police constable with the War Reserve Police, in spite of his criminal record. It was during this time that he committed his first murder in 1943—or at least the first murder that we know about. 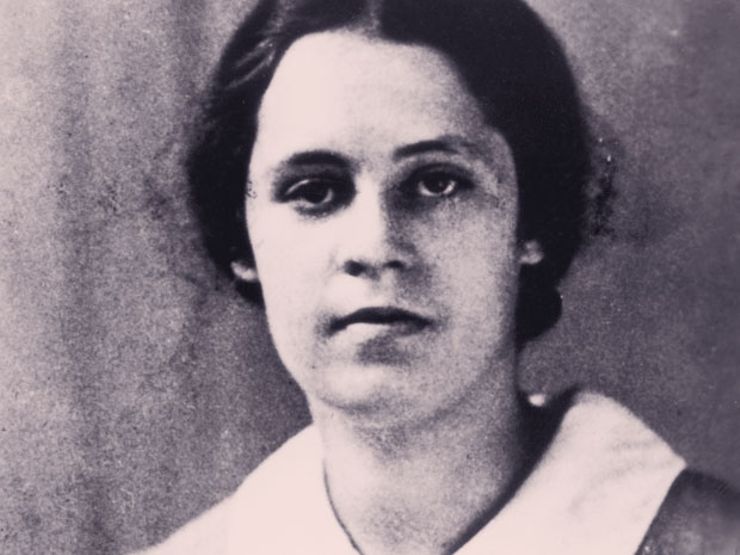 A photo of Ruth Fuerst

She was a munitions worker and part-time prostitute named Ruth Fuerst. According to Christie, he strangled her impulsively during sex at his home. Initially, Christie hid Fuerst’s body beneath the floorboards in his living room. He then moved the remains to a shallow grave in the back garden.

In 1944, Christie claimed his second victim, a woman named Muriel Eady. Christie killed her using a technique that he would later employ on many of his other victims: rendering the person unconscious with domestic gas. Once Eady passed out, Christie sexually assaulted her, and then strangled her to death. He buried her body in the back garden, beside Fuerst’s remains. 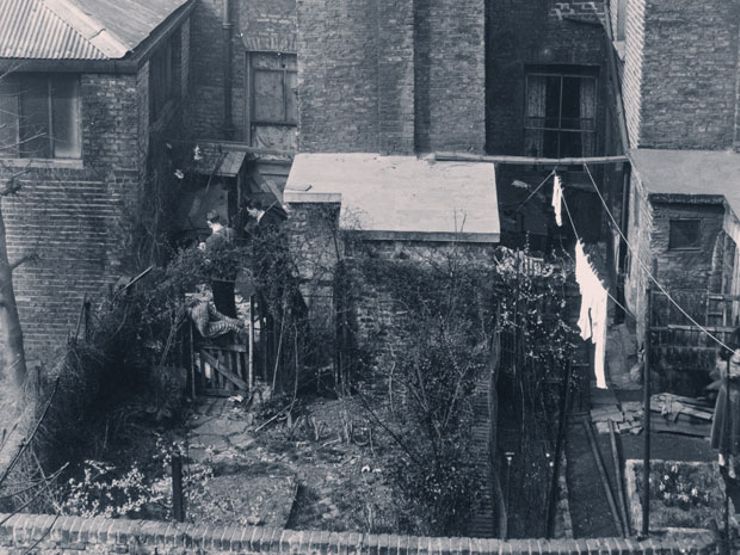 An aerial shot of John Christie’s backyard, where he buried some of his victims

In March 1953, Christie moved out of 10 Rillington Place. By then he had claimed more victims, hiding three bodies in a kitchen wall and burying several more in the back garden. It was the following tenant’s discovery of those three bodies in the kitchen wall—Christie’s final victims—that cracked the case and led to his apprehension.

As grisly as John Christie’s crimes were, his arrest revealed yet another casualty: an upstairs neighbor, who was wrongfully executed for murders now widely believed to have been the work of Christie.

The murder victims were Beryl Evans and her 13-month-old daughter Geraldine. Beryl had moved into the top-floor flat at 10 Rillington Place with her husband Timothy in 1948, where she gave birth to Geraldine. Just over a year later, both Beryl and Geraldine were dead, and Timothy went on trial for their slayings. Christie served as a principal witness. 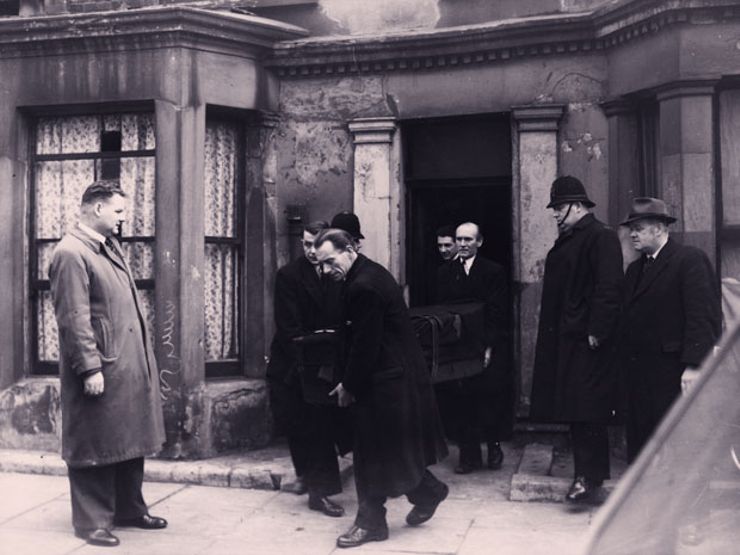 Timothy Evans initially claimed that Christie had killed Beryl during a botched abortion procedure. Later, under police questioning, Evans confessed to the murder himself, though his confession contained a variety of troubling incongruities—including not knowing where the bodies were actually hidden. Once he was charged with the murders, Evans withdrew his confession and once again blamed Christie. In spite of this, Evans was found guilty and hanged in 1950.

Related: HE WAS THE FIRST KILLER CAUGHT USING DNA EVIDENCE

Three years later, Christie was arrested and confessed to the murder of multiple women, including Beryl Evans—though, oddly, not Geraldine. Eerier still, it was revealed that as police searched the property for the bodies of Beryl and Geraldine in 1949, the remains of Christie’s initial victims were exposed in his garden. According to Christie, a dog dug up a human skull from the backyard shortly after a police visit, and a human femur was later found propping up a fence. 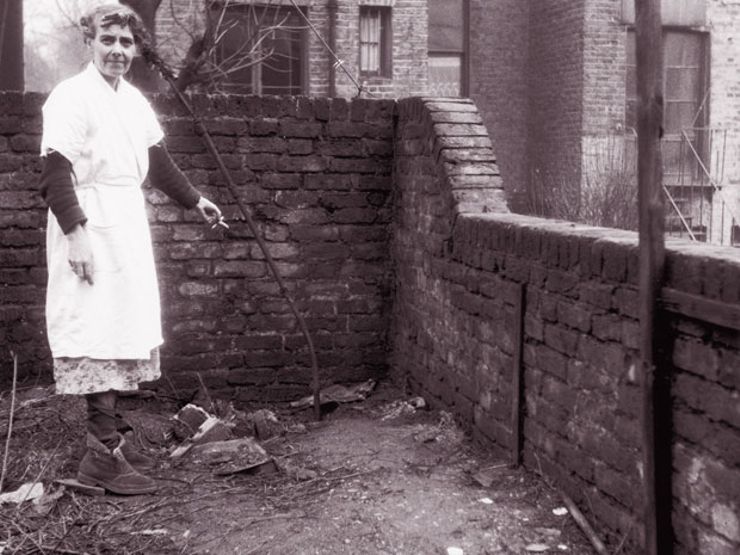 Had the police investigated Christie at the time of the Evans murders, they very well could have prevented the deaths of at least four other women, including the one for which Christie was ultimately tried and hanged; that of his wife, Ethel.

After his arrest, Christie admitted to seven murders—never claiming responsibility for the death of the infant Geraldine. There is some evidence to suggest that he killed several more women over the years.

Police discovered that Christie had kept pubic hair from several of his victims as trophies. While he had four distinct clumps of hair, only one, belonging to his wife, matched the bodies of any of the victims that had been recovered. Even if two of the other clumps belonged to Ruth Fuerst and Muriel Eady—whose bodies had by then decomposed to little more than bones—that would still leave one potential victim unaccounted for. 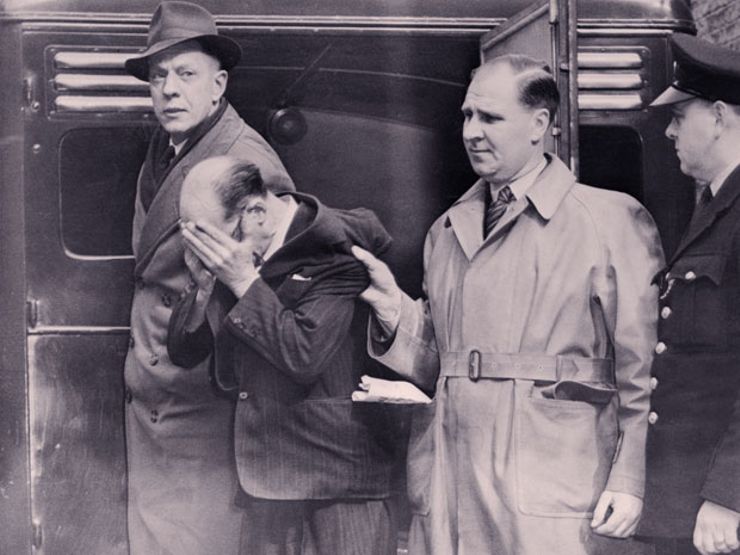 On July 15, 1953, John Christie was hanged at Pentonville Prison for the murder of his wife. His string of slayings left a lasting impact on England’s public consciousness and how the United Kingdom punished its murderers. Christie’s trial revealed that the execution of Timothy Evans was a miscarriage of justice. Along with several other cases, the Evans execution contributed to the eventual abolition of capital punishment for murder cases in the United Kingdom. Evans was posthumously pardoned in 1966.

Want more creepy stories? Sign up for The Lineup’s newsletter, and get our strangest tales delivered straight to your inbox