Stephen Chbosky Returns With the Imaginary Friend of Your Nightmares

Get your hands on the new horror novel from the author of The Perks of Being a Wallflower before it's published!

SPECIAL NOTE: Imaginary Friend will be one of two books included in next month’s Creepy Crate.

If you were a teen within the last two decades, Stephen Chbosky’s name is likely deeply familiar to you. The author of The Perks of Being a Wallflower has a reputation that may seem outsized considering that the YA novel is his only book—but his newest novel, Imaginary Friend, makes it clear that he deserves his accolades. Imaginary Friend, unlike Perks, is a horror novel, but Chbosky’s ability to thoroughly immerse his reader remains untouchable.

Seven-year-old Christopher and his mother have just moved—again. Leaving her abusive boyfriend behind, they make a new home in what seems like a charming small town. And when Kate wins the lottery, they’re finally done scraping change together to get by. But Christopher is far less certain about their future. After all, there’s something in the woods behind their house. And that something has been giving him strange missions...

Imaginary Friend will be published on October 1, but you can get a sneak peek today, exclusively at The Lineup. Want the book before its debut? Imaginary Friend is one of the two titles included in our August/September Creepy Crate.

Read on for an excerpt from Imaginary Friend, one of two books included in the August/September Creepy Crate. 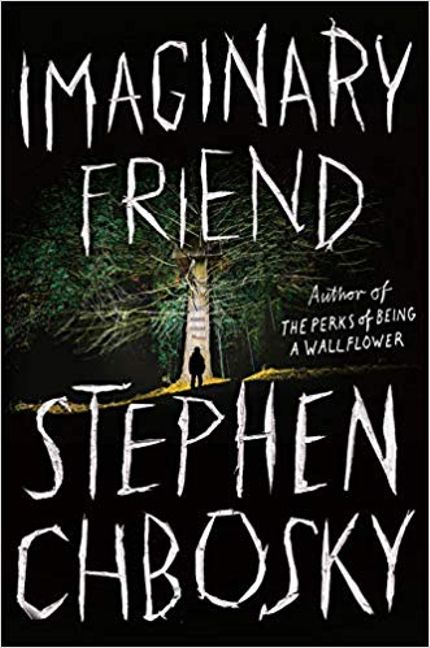 Christopher looked up. He couldn’t see the cloud face anymore. That’s how thick the trees were. He could still hear the rain, but not a drop fell to earth. The ground was still dry. Cracked like old skin. It felt like the trees were a big umbrella. An umbrella keeping something safe.

Christopher turned around. The hairs on his neck stood up.

There was silence. A quiet, shallow breathing. It might have been the wind. But something was here. Christopher could feel it. Like the way you know when someone is staring at you. The way he knew Jerry was a bad man long before his mother did.

He heard a footstep.

Christopher turned and saw that it was just a pinecone falling from a tree. Thump thump thump. It rolled down the ground and landed on

Related: 13 Scary Books That Will Make You (Even More) Terrified of Cabins in the Woods

The trail was covered by tree needles. And a few twisted branches. But it was unmistakable. A trail worn into the earth by years of bikes and ramps and races. By kids taking shortcuts to the other side of town. But now it looked abandoned. Like the construction fence outside had kept the kids away for months. Maybe even years. There wasn’t a pair of fresh footsteps on it.

He could see the imprint of shoes in the dirt. Christopher walked over and put his little sneakers next to it. They were about the same size.

It was a little kid’s footprint.

That’s when he heard a little kid crying.

Christopher looked down the trail, and he saw that the little-kid tracks went on for a long long time. The sound was coming from that direction. Far away. In the distance.

“Hello. Are you okay?” Christopher yelled out.

The crying got louder.

Looking for horror? Sign up for The Lineup's newsletter, and get our terrifying recommendations delivered straight to your inbox.

Christopher’s chest tightened, and a voice inside told him to turn around, walk back to school, and wait for his mother. But the little kid was in trouble. So, he ignored his fear and followed the footprints. Slowly at first. Cautiously. He walked toward an old creek with a billy goat bridge. The footprints went through the water and came out on the other side. They were muddy now. The little kid must be close.

Was that a voice? Was it the wind? Christopher picked up his pace. The littlekid tracks led him past an old hollow log that was carved out like a big canoe. Christopher looked ahead of him. He saw no one. The voice must be the wind. It didn’t make sense to him. But there was no other explanation because he saw nothing.

The light was far down the trail. Bright and blue. The place where the crying was. Christopher began walking after it. To help the little kid. With every step, the light got bigger. And the space under the trees got wider. And pretty soon, there were no trees above his head.

Christopher had reached the clearing.

It stood in the center of the woods. A perfect circle of grassy fields. The trees were gone. And he could see the sky. But something was wrong. He went into the woods a few minutes ago when it was day. But it was nighttime now. The sky was black. And the stars were shooting a lot more than usual. Almost like fireworks. The moon was so big that it lit the clearing. A blue moon.

Related: 19 Horror Movies Set in the Woods That Will Keep You Out of the Forest Forever

There was silence. No crying. No wind. No voice. Christopher looked around the clearing and saw nothing but the trail of footprints leading to

It stood in the middle of the clearing. Crooked like an old man’s arthritic hand. Reaching out of the earth like it was trying to pluck a bird from the sky. Christopher couldn’t help himself. He followed the footsteps. He walked up to the tree and touched it. But it didn’t feel like bark. Or wood.

Christopher jumped back. It hit him suddenly. This horrible feeling that this was wrong. Everything was wrong. He shouldn’t be here. He looked down to find the trail again. He had to get out of there. His mom would be so worried. He found the trail. He saw the little-kid tracks. But there was something different about them now.

There were handprints next to them.

Like the little kid was walking on all fours.

Christopher turned around. Something had stepped on a branch. He could hear creatures waking up all around him. Surrounding the clearing. Christopher didn’t hesitate. He started to run. He following the trail out. He reached the edge of the clearing. Back into the woods. But the minute he stepped under the trees, he stopped.

The trail was gone.

He looked around for it, but the sky was getting darker. The clouds were covering the stars now. And the moon was shining through the cloud face like a pirate’s good eye.

“Help me!” Christopher called out to the cloud face.

But the wind moved, and the cloud covered the moon like a blanket. Christopher couldn’t see. Oh, God. Please God. Christopher fell to his knees and started digging through the pine needles. Frantic. Looking for the trail underneath. The needles sticking to his palms.

He could hear the little kid now.

But it wasn’t crying.

Christopher found the trail with his hands and began to crawl on all fours. Get out of here! Faster! That’s all he thought. Faster!

The giggling was closer now.

Christopher started running. He moved so fast that he lost the trail. He ran in the darkness. Past the trees. His legs buckled when he stumbled into the creek. Past the billy goat bridge. He fell and ripped up his knee. But he didn’t care. He kept running. A full sprint. He saw the light up ahead. This was it. He knew it. The streetlight. He had somehow found the street again.

The giggling was right behind him.

Want to keep reading? Subscribe to Creepy Crate for your shot at getting Imaginary Friend.

Stephen Chbosky is the author of Imaginary Friend and The Perks of Being a Wallflower. His second novel, coming some 20 years after the smash success of Perks, has been highly anticipated. The chilling tale of a child's imaginary friend and the eerie woods behind a struggling family's house, Imaginary Friend will keep any horror reader up through the whole night. Want to read Imaginary Friend before its October 1 release? Sign up for Creepy Crate now!

This post is sponsored by Grand Central Publishing. Thank you for supporting our partners, who make it possible for The Lineup to celebrate the horror stories you love.