Shackled: Human Sacrifice in the Name of Satan

A teen runaway is kidnapped and forced to kill ... or be killed. 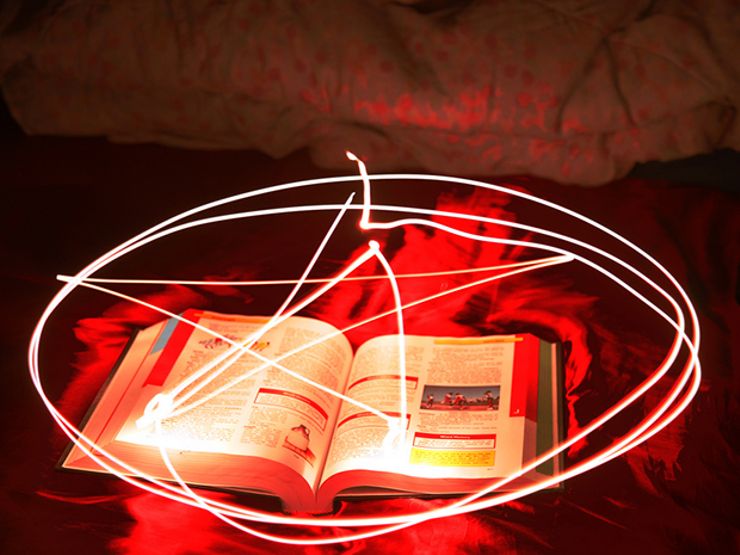 It’s every parents’ worst nightmare: Young people are being abducted by a shadowy organization and subjected to unspeakable depravities, like human sacrifice.

Award-winning author Ray Garton’s shocking horror thriller Shackled descends into a dark world of human trafficking, where fear and pain are tools of control, and innocence is sold to the highest bidder. While a handful of good and decent people try to combat this monstrously powerful evil, for some it is too late. When one teenage runaway is kidnapped and ordered to destroy a baby in the name of Satan, she must choose between a life of pure evil—or no life at all …

READ ON FOR AN EXCERPT AND THEN DOWNLOAD SHACKLED on Amazon, Barnes & Noble, and iTunes. 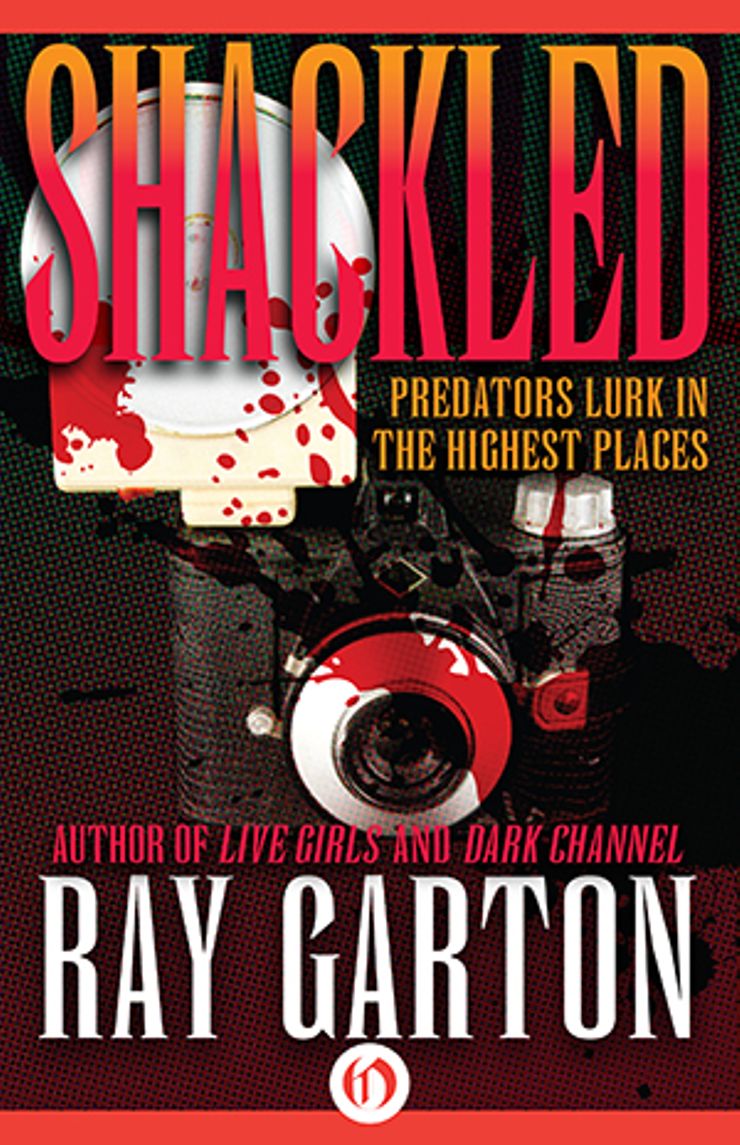 There were several people—how many, maybe 12, 15, more?—all dressed in black robes and wearing black hoods with long open slits over their eyes and mouths. In one corner of the room was a bright red light, and in another was a bright blue light; the result was a sickening sort of purple that poured over all the black, staring figures who formed a sort of haphazard circle.

In the middle of that circle was a rectangular platform directly beneath the upside-down cross with the man on it. On that platform lay a small shape beneath a black blanket. She could see a head and two little hands poking from the top of the blanket. A baby, still, motionless, as if it were sleeping.

One of the black-clad, hooded figures stepped forward when Lacey walked in. It approached her and held out a black-gloved hand to take one of hers gently. The figure spoke to her in a quiet but somehow familiar voice.

“Hello, Lacey,” he said. His voice was a low, moist mumble. “We don’t want to make too much noise because the baby is sleeping.” He led Lacey by the hand toward the platform. She could tell that his hands were large and strong and they frightened her a little. “We have something for you to do,” he said, his voice so quiet and wet, “but first, I want to ask you something.” He turned to face her, and even though he wore a hood, she could tell that his eyes were very serious. “You know that you are absolutely worthless and that you have lived to deserve what you are receiving here, am I correct?” he asked, so casually that Lacey automatically nodded. “You know that you have no other choice than to do what we tell you because of your worthlessness, am I correct?”

Once again, Lacey nodded, wearing an expressionless look on her face.

“You know that you have reached the destiny to which you have been bound since birth, correct?”

Again, she nodded, but this time without any hesitation because she knew he was right.

He lifted his right hand and it held a very large, serrated dagger with a goat’s head carved at the end of the handle. 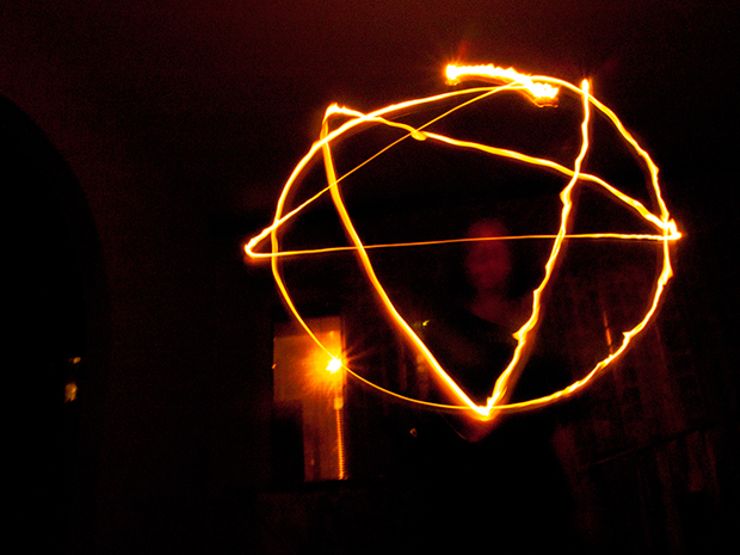 “Here,” he said. “This is for you. We want you to kill the baby with it as a sacrifice to our lord Satan, the Prince of Darkness. Because you know your worthlessness, you know that you have no choice and that you must do this.”

In spite of the horrible words he spoke, his soft, wet voice sounded friendly, amiable.

“Take the knife,” he said, holding it toward her. “Take it. Unlike everyone else, we accept you. To us, you have worth. To Satan, you are valuable. To Satan, you are priceless. But first … to prove your worth … you must kill this baby as a sacrifice to him, so that he will know you are deserving of his respect.”

“Now, go stand over there, beside the baby. We will perform a chant to our lord Satan, and when I say, ‘Do it,’ you put the knife into the baby to prove your worth to Satan. Because, after all, he is the only one who will accept you now. You have no choice. You have nothing else.”

Lacey felt sick. She thought she might vomit soon.

Related: SATAN AT THE DOOR: THE SINISTER EVENTS SURROUNDING THE SENTINEL

“Come with me,” the man said quietly.

Lacey took the ugly dagger in her right hand mechanically, as if she were a robot.

Lacey went to the platform. The man stood behind her, reaching around her to place both of her hands around the handle of the dagger and lift them high above her head. 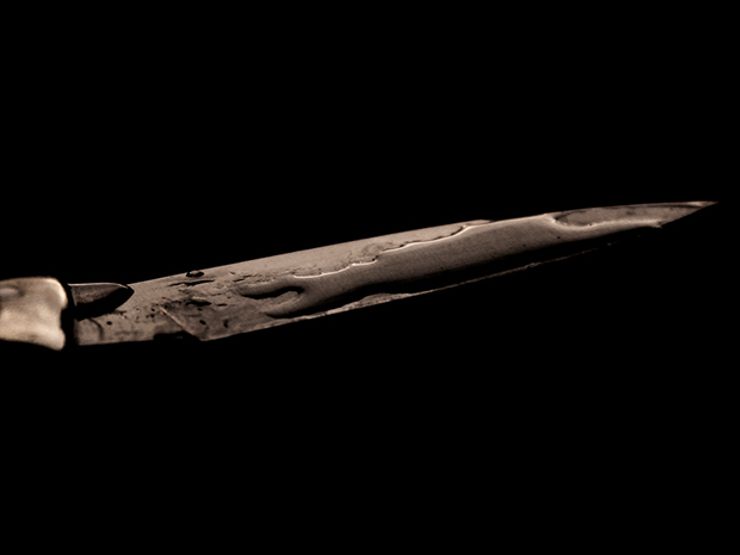 She stood there, feeling numb. The man walked away from her, and in a moment the group began to chant gibberish. It made no sense to her, the rhythmic blabbering that came from all the black clad, hooded figures was senseless … but somehow it reached deep inside her and chilled the marrow of her bone.

Lacey looked toward the door, where the nurse stood with the gun held at her waist—exactly the way Carolee used to hold it—pointed directly at her.

Suddenly, in the middle of the gibberish, she heard the man say, “Do it.”

Her fingers tightened around the handle of the dagger so hard that her knuckles paled. She held the blade above her head but was frozen, paralyzed, and could not move.

“Do it,” the man said, still quietly, but with more emphasis.

Related: TWIN SISTERS RECALL GROWING UP IN THE ‘CHILDREN OF GOD’ CULT

Lacey could not move her arms as she looked down at the small form beneath the blanket, head turned to the side, its skin turned a dull purple by the lights. With the blanket pulled up so far and the baby’s head turned away from her, she couldn’t see its face, which was probably better. She couldn’t even tell if it was on its stomach or its back.

“Do it!” the man barked as the others continued to chant.

She looked at the nurse with the gun pointed at her, at the others in black with their hoods hiding their chanting faces and with all their eyes burning into her, and with all the strength she could muster, she plunged the knife downward into the center of the infant’s body, then pulled it back out immediately, as if that would make a difference. She saw that the blade was covered with glistening blood.

Lacey turned to her right, leaned forward, and vomited onto the floor.

Related: A RECIPE FOR MADNESS

That was when everyone around her—all the people clad in black and wearing hoods to hide their faces—began to laugh. They laughed so hard that they leaned forward, clutching their stomachs.

Lacey looked around at all of them with wide, horrified eyes, still clutching the bloody knife.

The man who had spoken to her stepped forward. He was laughing, too, but quietly as he approached her and put his big, black-gloved hands on her shoulders. When he finally spoke through the laughter, Lacey could tell, somehow, that he was grinning.

“The baby,” he said quietly, “was not real.” He reached down and pulled back the blanket to reveal what looked like a life-size doll that was oozing blood from its wound. “A doll filled with strawberry jam. But you have shown us that you will do as we ask. Someday, the baby will be real.”