The Fight to Keep Her Sister’s Killer Behind Bars

Vicki Dill's older sister was murdered in 1973. After years of going unsolved, the case was finally closed ... and now the killer wants to be set free.

In 1973, 18-year-old Debra Ann Dill had just quit high school to get married to a local police officer. Dill left one night for a date with her fiancé, but the next morning, her body was discovered next to her car. The tragic case turned cold until 15 years later when a phone call from a Connecticut prison changed everything.

We talked to Vicki Dill, Debra’s younger sister, about the investigation process, the fight to keep the perpetrator behind bars, and celebrating Debbie’s legacy.

Why did you want to tell Debra’s story on Motives & Murders?

Debbie was my sister. What happened to her and how it happened needed to be told, with hopes this would help other families who might be in a similar situation, holding on to hope of finding a killer.

Briefly describe your experience with the police investigation.

I was 10 years old, but I will never forget the day the police came to the house to tell my parents. As years went on with the investigation, the police, one in particular, would make sure our family was aware of any new leads in the case. He assured us he would not let it go.

Were there any people who worked on the case who made an impression?

Yes. There were names mentioned, but Lyndon Abbott is the one that sticks in my mind the most. He was the one who I remember always contacting the family and keeping us up on the progress. Even when he retired, he would check in on the case and any new leads. He was great through all of this, all 15 years of wondering who did it.

Was the process what you thought it would be?

As I grew older, it became part of my life. We would get updates if they had any new ones. I didn’t want to stop hoping they would find the person who was responsible. It was a long process, but it finally came to an end … or so we thought.

Are there any misconceptions that the public may have?

The police aren’t doing their job. What is taking them so long? How come they haven’t found this guy yet?—I think all of these are real feelings from people, but until you are thrust in the midst of a murder, you don’t know how long it really takes. It doesn’t happen overnight. There were many people interviewed and questioned. This took place in 1973, just what was available to help solve murders then? The police had limited resources, as compared to today. Good old fashioned detective work was how things got solved in those days. And they never gave up. I have seen the books of reports and interviews of all the people they talked to and followed up with. BOOKS!

What does Debra’s legacy mean to you?

Debbie was my big sister. I looked up to her. Debbie was ripped from my life before I could even think. I won’t forget her, and I don’t want others to either. She was an energetic girl and she looked out for me. Debbie would take me swimming and share candy with me. That was a very special time for me and I cherish that now, in memory. 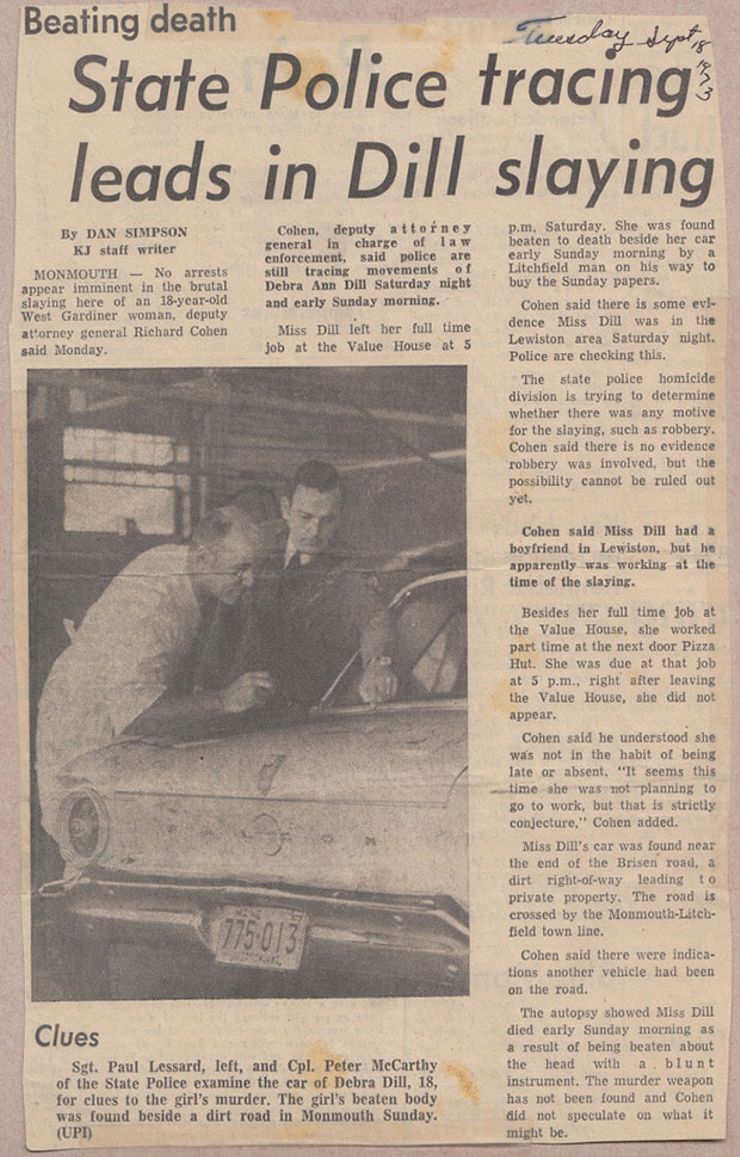 News article from 1973 about the Debbie Dill case.

What do you hope viewers learn from the story?

Debbie was an innocent victim to a violent murder. She didn’t ask for this nor did she deserve it. The person that did this to her is where he should be, for the rest of his life. I also hope this story of a brutal crime brings hope to another family that could be in a similar situation of the unknown. I hope they never give up on the investigators that are working on a case. Keep believing that the criminal will be found.

What would you say to other families who may be in a similar situation?

Don’t give up. Don’t let the bad guy win. It is very difficult to go on, but you can do it. As a sibling to a murder, I am part of a support group, and it has helped me a great deal. Parents of Murdered Children (POMC) is a national organization, and almost every state has a chapter or two you can join. Don’t stop talking to family, friends and folks that know the victim. Don’t ever let your loved one be forgotten. Celebrate: The victim’s birthday, holiday, favorite meal, and favorite color. Whatever keeps their spirit and memory alive with you. It isn’t easy to do at first, but tears are your sign of the deep love you had for this person. I have shed many tears, and they aren’t done yet.

Every five years your family is forced to attend a parole hearing for the inmate in Maine State Prison. Describe the emotions and challenges your family faces.

Just reading this question, there is a lump in my throat and tears well up. What an emotional day for all of us. The sheer fact we have to go in front of people we don’t know, relive the nightmare that we did in 1973, and beg to the parole board to keep that monster behind bars. Emotions: crying, sleepless nights, sick to your stomach, headache, shaking, nervous, anger, and fear. These are all balled up inside of you as you walk into that prison.

Why is it important for you to convince the parole board to keep the inmate in prison?

If we don’t go to parole hearings, they could let that inmate out. He has a long violent history, and if he gets out, he will do this again. If not to another family, then it will be to ours, again. As we fight every 5 years to keep him where he belongs, we have to drudge up all the bad things that happened. Many of us read an impacting statement to the board, and my mom carries her scrapbook. Every single article, picture, report are in that scrapbook. It is too big and should not be in any family. That book should be of grandchildren my mom has. Not of her murdered daughter. Our quest, our mission, is all for Debbie. Her picture goes to every parole hearing we attend. The last one we had, we invited the media, to help get the word out, and that this killer needs to stay right where he is: behind bars for life.

Related: “WHO KILLED MY DAUGHTER?”

How can viewers find out more/take action?

To take action: This is for our family as well as many others. Support POMC (Parents of Murdered Children) if there is a local chapter that holds meetings or fundraisers, help them. People can show support to the Maine chapter of POMC, by sending contributions in memory of a loved one, or just to help a victim’s family in Maine, inscribe their loved ones name on the Maine POMC Memorial. That memorial is located in Augusta, Maine, and it is a wonderful tribute to murder victims in Maine. Thank you all for listening, caring and sharing. With this story, Debbie’s memory will live on.

Police Search For Leads After Dog Is Found With Duct-Taped Head, Snout

All Photos Courtesy of Crime Feed