These creepy kids toys don't get much love during nap time ... for good reason.

The Conjuring shined the spotlight on my favorite creepy couple, Ed and Lorraine Warren. They were paranormal investigators who investigated cases like the Amityville haunting and the case that became The Haunting in Connecticut. To this day artifacts from their work are viewable at The Warrens Occult Museum. The crown jewel of this collection is the Annabelle doll.

The Annabelle doll was given to a girl named Donna by her mother in 1970. Donna and her roommate, Angie, noticed the doll would switch positions or move around the apartment when they weren’t looking. Eventually they began finding messages on parchment paper like, “Help me,” even though they did not keep parchment paper in the apartment. They brought in a medium who concluded the doll was possessed by the ghost of a girl who was buried underneath the apartment. The invents increased—Annabelle was found with a red substance coming out of her hands, moving around more, and, as their friend Lou remembers:

“Lou awoke one night from a deep sleep and in panic. Once again he had a reoccurring bad dream. Only this time somehow, something seemed different. It was as though he was awake but couldn’t move. He looked around the room but couldn’t discern anything out of the ordinary and then it happened. Looking down toward his feet he saw the doll, Annabelle. It began to slowly glide up his leg, moved over his chest and then stopped. Within seconds the doll was strangling him. Paralyzed and gasping for breath Lou, at the point of asphyxiation, blacked out. Lou awoke the next morning, certain it wasn’t a dream, Lou was determined to rid himself of that doll and the spirit that possessed it. Lou, however, would have one more terrifying experience with Annabelle.

Preparing for a road trip the next day Lou and Angie were reading over maps alone in her apartment. The apartment seemed eerily quiet. Suddenly, rustling sounds coming from Donnas room aroused fear that someone had possibly broken into the apartment. Lou determined to figure out who or what it was quietly made his way to the bedroom door. He waited for the noises to stop before entering and turning on the light. The room was empty except for Annabelle whom was tossed on the floor in the corner.

Lou scoured the room for forced entry but nothing was out of place. But as he got close to the doll he got the distinct impression that somebody was behind him. Spinning around he was quick to realize that nobody else was there. Then in flash he found himself grabbing for his chest, doubled over, cut and bleeding. His shirt was stained with blood and upon opening his shirt there on his chest was what looked to be 7 distinct claw marks, three vertically and four horizontally, all were hot like burns. These scratches healed almost immediately, half gone the next day, fully gone by day two.”

To this day Annabelle lives in the occult museum. Her locked case is “holy water encrusted.” 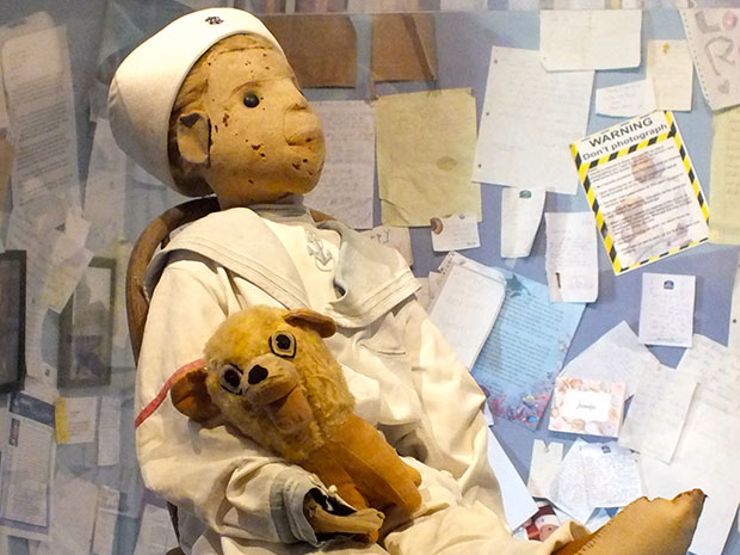 Robert was given to artist Robert Eugene Otto in 1906 by an unhappy servant, who practiced black magic. Throughout his childhood, Otto’s parents heard him playing with and conversing with the doll, assuming he was replying to himself in a disguised voice. Robert is considered one of the most haunted objects in the world.

“Neighbors claimed to have seen the doll moving from window to window when the family was out. Sometimes the doll would emit a terrifying giggle, and the Otto family caught glimpses of it running from room to room. In the night Eugene would scream, and when his parents ran to the room, they would find furniture knocked over and Eugene in bed, looking incredibly scared, telling them that “Robert did it!”. In addition, guests claim to have seen Robert’s expression change before their eyes and he often blinked.

When Eugene died in 1974, the doll was left in the attic until the house was bought again. The new family included a 10-year old girl, who became Robert’s new owner. It was not long before the girl began screaming out in the night, claiming that Robert moved about the room and even attempted to attack her on multiple occasions. More than 30 years later, she still tells interviewers that the doll was alive and wanted to kill her.”

3. This Painting of a Boy and His Creepy Doll Friend 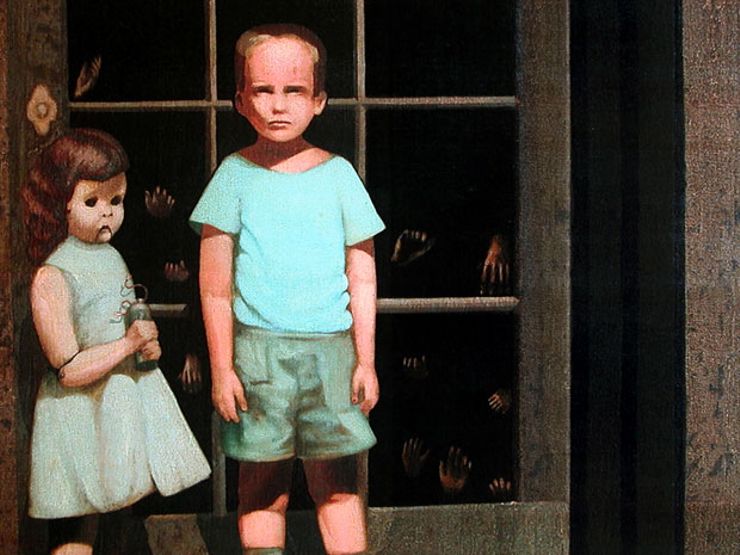 Haunted dolls don’t even have to be a three-dimensional object to cause terror in the life of its owner. The painting, The Hands Resist Him, is said to come with a terrifying history:

“According to the couple, the figures in the painting moved around at night, sometimes disappearing from the canvas entirely. The boy in the painting was said to actually enter the room where the painting hung, and everyone who viewed the painting reported feeling sick and weak. Small children would take one look at the painting and run from the room screaming. Adults sometimes felt like unseen hands were grabbing them, and others said that they felt a blast of hot air, as if they had opened an oven.”

Mandy was a doll that cries in the middle of the night and leaves windows open. Her turn of the century family eventually gave her to a museum to stop the terror. Now she makes the museum staff’s lunches disappear or walks around and frightens people with her footsteps.

To read the rest of the list, go to Creepy Catalog.

Want more haunted toys? Sign up for The Lineup's newsletter, and get our strangest tales delivered to your inbox.

READ MORE:
29 Creepy Quotes That Will Make You Believe In Ghosts
Here Are The Creepiest Monster Legends From Every State In The Country
29 People Reveal Their Terrifying And Heroic Tales Of Coming Face To Face With A Burglar In Their Own Home