Unearth the eerie history of Hart Island, a massive cemetery off the coast of New York City where over one million souls are entombed in unmarked graves.

New York City certainly has its fair share of hidden spots – from the abandoned buildings on dead-end streets to colonial relics from the not-so-distant past. But along the northern coast of the Big Apple lies a small island with a dark and troubled history.

Hart Island, located in the Long Island Sound just off the coast of The Bronx, is little known to city residents. Over the years it has functioned as a Civil War prison camp, a sanatorium, and, most infamously, as an immense burial ground for the city’s unknown dead. But just what is the story behind this mile-long sliver of land?

Thomas Pell, a physician from England, came to the New World and purchased a substantial amount of land from the native inhabitants in what is now The Bronx and Westchester County. The year was 1654, and Hart Island was included in Pell’s purchase from Chief Wampage of the Siwanoy people. The exact amount Pell paid for the land is unknown, though some rumors state it was nothing more than a cask of rum.

During the Civil War, the island functioned as a prisoner-of-war camp for the Union Army. Just over 3,000 Confederate soldiers were jailed there, some dying during their stay. In 1869, the City of New York purchased the island for $75,000, transforming it into a potter’s field for the city’s growing burial demands. 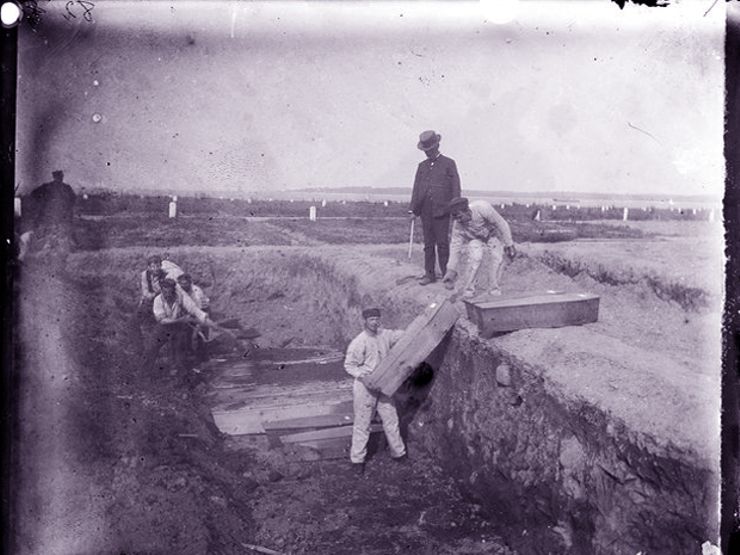 A burial trench on Hart Island

The first person to be interred on Hart Island was a 24-year-old woman named Louisa Van Slyke, who died in 1869 with no family or friends to claim her body. Initially, unknowns were buried in single plots – but as more bodies were shipped ashore, cemetery workers soon ran out of space.

Consequently, the city started burying people in mass graves – long trenches that each held 48 bodies, one on top of the other. Children and infants were buried in troughs that held up to 1,000 bodies.

It wasn’t long before the site became largest tax-funded cemetery in the world.

In addition to providing burial grounds for the outcast dead of the five boroughs, Hart Island also served as a quarantine site during a yellow fever outbreak in 1870, and was a convalescent hospital for tuberculosis patients. A labor center for delinquent boys was also established on its shores. 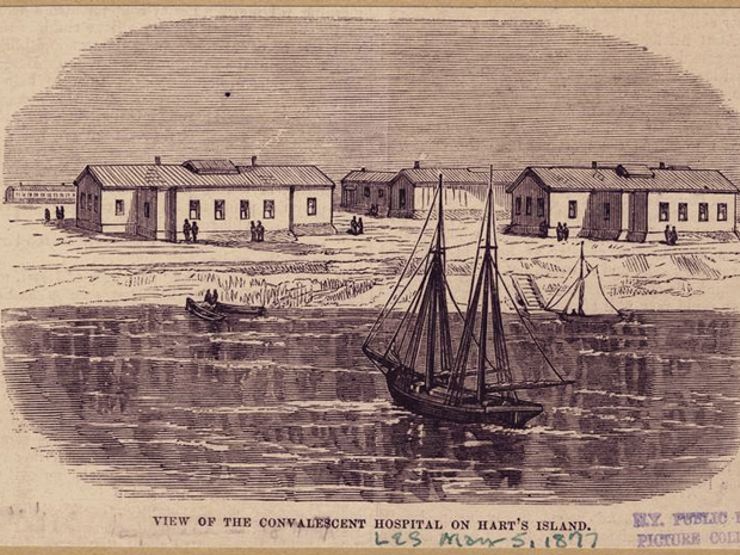 An etching depicting the medical facilities on Hart Island

In the late 19th century, Hart Island supplied overflow housing for female patients from the Blackwell Island Insane Asylum on what is now Roosevelt Island – receiving only the most chronic cases. Later, the outpost transformed into the Phoenix House, a drug rehabilitation center whose residents were tasked with fashioning leather shoes. Scraps of old leather still litter the island to this day.

By 1977, following the closure of Phoenix House, the island was vandalized and nearly all of its burial records were lost in a fire. But that did not deter New York City from continuing to use the island as a burial site. Over one million people have been interred on Hart Island since it first started as a potter’s field. All of the graves are unmarked – with the exception of one. That plot belongs to the first child to die of AIDS in New York, who was buried in isolation, with no name.

Related: 9 Most Haunting Ghost Towns From Around the World

Today, the cemetery is a resting place for the indigent and for those whose families simply cannot afford to pay for a proper funeral. Inmates from nearby Riker’s Island perform the burials. The isolated nature of Hart Island has made it exceedingly difficult for the bereaved to pay their respects – historically, grieving friends and family have been forbidden from setting foot on the island.

It was not until July 2015, that the city government announced it would facilitate visits by family members, following the settlement of a class-action civil liberties lawsuit.

Finally, some life will wash ashore on Hart Island. 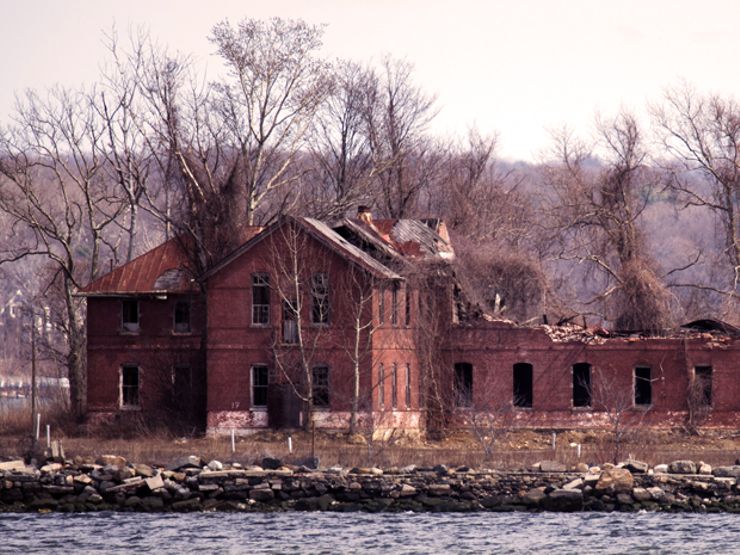 The present-day ruins of Hart Island