Deadly Love: The Mystery of the Hall-Mills Murder

Who killed the Reverend and his pretty choir singer?

Though it’s largely forgotten now, the bizarre mystery of the Hall-Mills murder of 1922 was once the most publicized criminal investigation in the country. The sensational qualities of the case, coupled with its cast of made-for-the-tabloids characters, positioned the slayings at the center of a major American media of the early twentieth century.

It began with two young lovers out for a morning stroll in the New Jersey countryside, who soon stumbled upon a grisly discovery: The body of a man and woman, shot dead in a field. The victims were carefully posed after death, their feet pointed toward a crab apple tree, his hand placed on her neck, hers on his thigh. Both had been shot in the head with a .32-calibre pistol; the man once, the woman three times. Around them were scattered shreds of love letters, and his calling card at his feet. 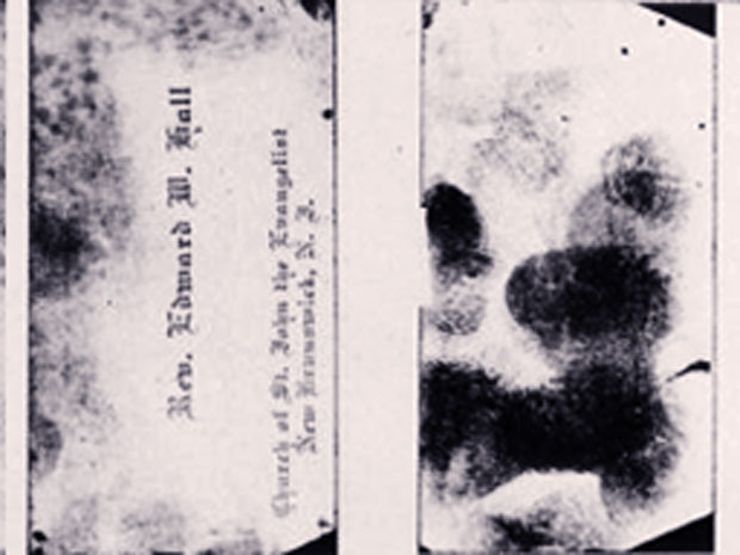 The man was Reverend Edward Wheeler Hall, an Episcopal priest in New Brunswick. The woman was Eleanor Reinhardt Mills, a singer in the choir at his church with whom he had been having an affair. Both were married to other people. The Reverend’s wife was Frances Noel Stevens Hall, a wealthy older woman whom many in the community believed the Reverend had married for money. Eleanor’s spouse was James Mills, a sexton at the church and a janitor at a nearby elementary school. The love affair was an open secret in the town. When news of the deaths spread, curious citizens flocked to the crime scene.

Souvenir hunters crowded the area, contaminating evidence and even passing around the calling card that was left at Edward Hall’s feet.

Adding to the fire was the odd and grisly state of the victims’ bodies. Besides being shot in the head three times, Eleanor Mills’ throat had been cut, and a later autopsy revealed that her tongue and larynx had also been cut out. Though Edward Hall still wore his glasses and a Panama hat covered his face, his watch was missing.

Authorities declared jealousy the motive, and suspicion soon fell upon Edward Hall’s wife and her two brothers. Mrs. Hall (above) was related to one of the wealthiest and most prominent families in New Brunswick—fueling the flames of the media frenzy when she was brought to trial in November of 1926.

Newspapers like the New York Times and the New York Daily Mirror devoted inches of column space to the proceedings. The papers even gave nicknames to many of the key players in the crime, referring to Eleanor Mills as “the glamour-girl of the choir,” while the chief witness of the prosecution was a woman who lived nearby and raised hogs, dubbed the “pig lady.”

RELATED: HE WAS THE FIRST KILLER CAUGHT USING DNA EVIDENCE

The murder trial lasted thirty days. While Mrs. Hall and her brothers had both motive and means, they were ultimately acquitted of the murders, due largely to a lack of adequate evidence—an issue exacerbated, no doubt, by the contaminated crime scene. After her acquittal, Mrs. Hall brought a defamation suit against the New York Daily Mirror for their coverage. 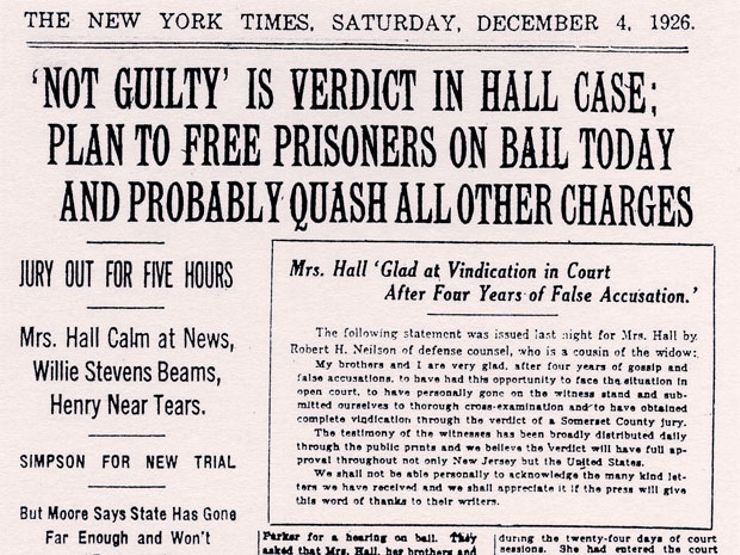 While most historians now believe that Mrs. Hall and her two brothers were the guilty parties, the case has officially never been solved. That doesn’t mean that it hasn’t been resurrected time and time again in media and even in the movies. Acclaimed authors Damon Runyon and Mary Roberts Rinehart were among the journalists who reported on the trial, and it found its way into both fiction and nonfiction accounts throughout the years. It has even been suggested that the Hall-Mills murder case was the inspiration for a part of The Great Gatsby, which was published just a few years after the murders.