These nightmarish tales of real-life roller coaster deaths will have you rethinking that summer trip to the amusement park.

I certainly don’t want to ruin anyone’s summertime fun, but you need to know that there’s a very slight chance you could get KILLED on an amusement park ride this summer. Just as with love and war, amusement parks are all fun and games until somebody winds up dead.

According to the U.S. Consumer Product Safety Commission, an average of 4.5 Americans died every year on amusement-park rides from 1987-2000. Between the years 1994 and 2004, 22 Americans lost their lives on roller coasters as a result of mechanical failure or operator errors. This means you’re more likely to die on a roller coaster than you are to be eaten alive by a shark. So if you’re at some beach resort that has a boardwalk with rides, you’re safer throwing yourself to the sharks.

Here are 13 cases where people came seeking a temporary thrill but wound up permanently dead. 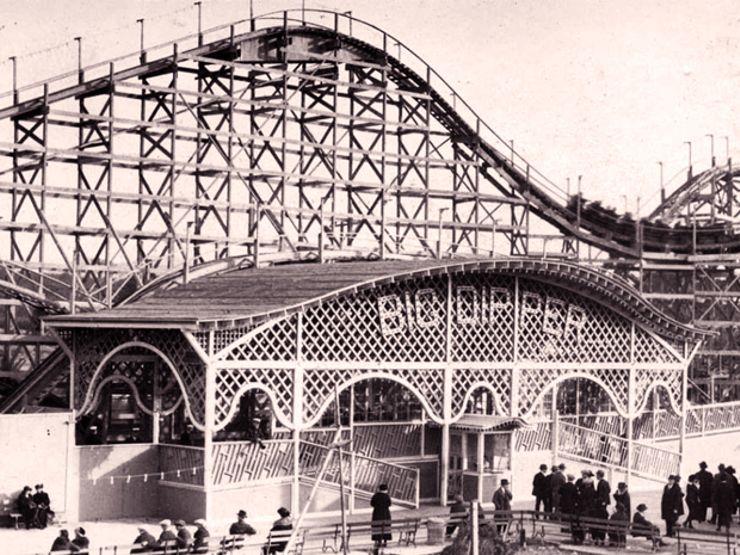 England’s Battersea Park Fun Fair had been operating for 20 years with the creaky old wooden coaster the “Big Dipper” (pictured above) as its main attraction until one day in late May 1972 when the rope that carries cars to the top of a hill snapped, sending several cars careening backward and ultimately crushing five children to death. Thirteen others were injured. The Big Dipper was shut down, and the park followed suit two years later.

Protip: If you ever see a roller coaster that calls itself the “Big Dipper,” run screaming in the opposite direction. Omaha, Nebraska’s Krug Park was home to another “Big Dipper” that wound up crushing four people to death in July 1930 when a brake malfunction caused several cars to fall 35 feet to the ground. An additional 19 people were injured. Omaha promptly passed a law banning roller coasters within city limits.

According to several witnesses, 52-year-old Rosa Ayala-Gaona Esparza expressed concern to park workers that she didn’t feel that the safety bar in her car had sufficiently closed before the ride took off, but they dismissed her worries. Her daughter said that early in the ride, she looked behind to see her mother’s head on the floor and her feet up in the air. A few moments later, she saw her mother’s entire body fly out of the car. Ms. Esparza fell 75 feet and onto the roof of the ride’s “Honky Tonk Tunnel,” nearly severing her body in two. Bloodstains and pieces of her tissue were scattered in a 75-foot radius around the point of impact.

The triple-loop “Mindbender” roller coaster inside West Edmonton Mall was touted as the “world’s safest roller coaster” and one of the “safest rides in the world.” Then one day in June 1986 as a live concert was underway beneath the coaster, four bolts came loose from a wheel assembly and the final car crashed into a concrete pillar, killing three while horrified concertgoers watched.

At Georgia’s Six Flags theme park near Atlanta one day in June 2008, 17-year-old Asia Leeshawn Ferguson lost his hat while riding on Batman: The Ride. After disembarking from the ride, he hopped over two security fences to retrieve his hat, only to be decapitated by the coaster, which was speeding at 50MPH. 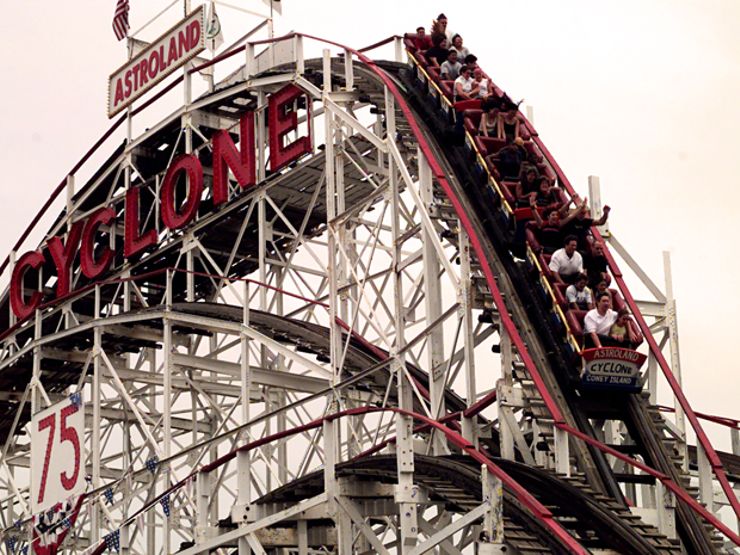 This is the only coaster on the list I’ve been on, and that was back in the 1980s when it was already creaky and rusty and old and therefore fairly terrifying. The Cyclone (above) was built in 1927 and has been linked to three rider deaths, including a man who stood up from his seat one day in 1985, only to fatally smack his head on a crossbeam.

Back before the world-famous Cyclone was built, Coney Island featured a roller coaster originally called Drop-the-Dip but whose name was changed to honor President Theodore Roosevelt’s legendary Rough Riders. On July 27, 1915, one of the coaster’s cars left the track, flipped, and sent three people plummeting to their death.

May 5, 2007—which was Children’s Day in Japan—saw a fatal accident when a stand-up steel roller coaster in Osaka suffered a broken wheel axle, causing the second car to derail and scrape a 19-year-old female university student’s head against a guardrail for over 300 yards, killing her. At least 18 others were injured in the disaster. 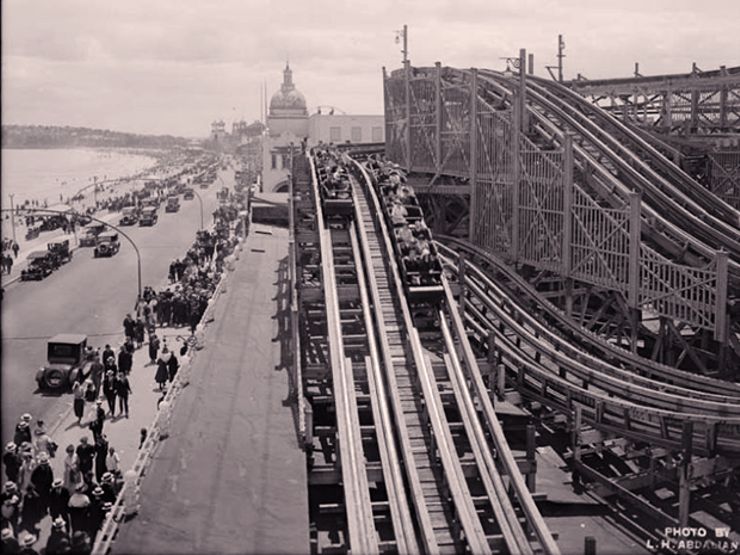 Boston’s “Derby Racer” roller coaster (pictured above) was a dangerous concept out of the gate—it featured two trains on a Figure 8 track racing alongside one another until reaching the bottom of the ride. One day in June 1911 while the roller coaster company’s owner was standing up in a roller coaster car delivering a speech to other passengers about safety, he ironically fell to his death. In 1917, another man fell and got creamed into paste after reaching out of the Derby Racer to retrieve his fallen hat. And in 1929 the Derby Racer claimed its third fatality when a rider was thrown from the train.

In August 2001 at an amusement park west of Tehran, several cars from a roller coaster became derailed and fell crashing to the ground, killing three and injuring four more. Angry visitors, furious at the lax safety precautions that led to these deaths, proceeded to throw rocks and bricks and stones at park buildings.

While riding on an indoor kiddie coaster called the Python Pit at a California amusement park called Go Bananas, a three-year-old boy managed to wriggle out from underneath his safety bar, whereupon he fell in between two cars and died from multiple injuries.

While onboard a kids’ coaster called Puff the Little Fire Dragon at Utah’s Lagoon Amusement Park in 1989, a six-year-old boy fell out of his car and beneath the train tracks. The problem was, the operator sent the train around the track again. As the boy stood up, the car struck him in the head, instantly killing him. 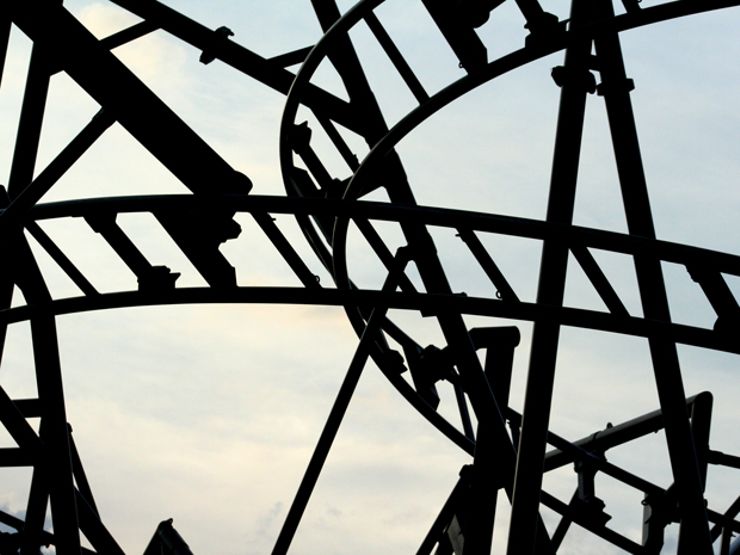 A ride attendant at the Star City theme park in the Philippines (above) says that a 37-year-old man quietly inquired whether falling from the coaster could potentially kill someone. He was told that it could. According to multiple witnesses, once the ride started going, the man wriggled out of his harness and willingly plunged to his death.