A Visit to Bomarzo’s Eerie Garden of Monsters

Tucked away in central Italy is a mysterious garden that haunts the dreams and nightmares of its visitors ...

Nestled in a valley near the village of Bomarzo, Italy is a mysterious garden known by many names. Some call it the Garden of Bomarzo due to its proximity to the village. The site’s creator called it Sacro Bosco, or Sacred Grove. Most, however, know this wondrous place as the Garden of Monsters, for reasons that are clear to anyone who sets foot inside.

Lurking in the garden’s lush greenery are dozens of strange stone beasts and towering tableaus, all carved from the surrounding volcanic rock. 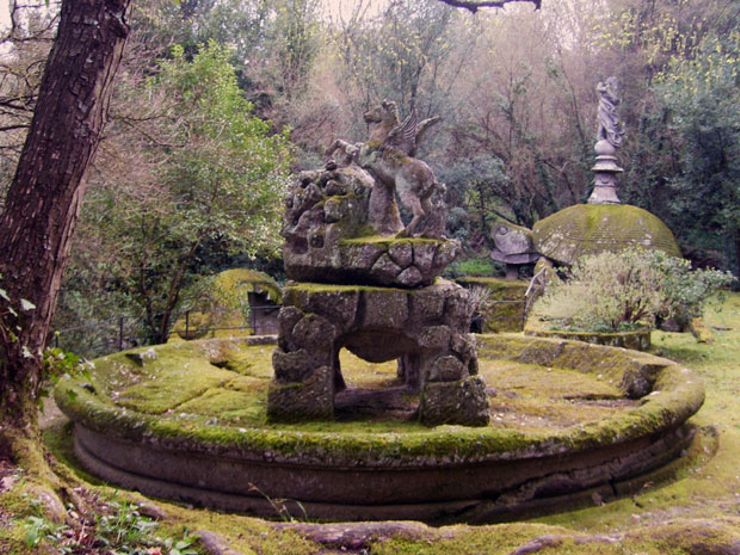 The garden was created at the behest of Pier Francesco Orsini—also known as Vicino Orsini—a military leader from the 16th century. He had the site created after the death of his wife, and some say that its carvings reflected the madness and grief he felt in her absence. The only clues Orsini left behind as to the reason behind his strange garden lie in the cryptic engravings hidden throughout the park. At the entrance, visitors are greeted with an inscription that roughly translates, “You who enter this place, observe it piece by piece and then tell me whether so many wonders were made to deceive or purely for art.”

To create the park, Orsini is said to have commissioned architect Pirro Ligorio, who designed the famous Tivoli Gardens and completed St. Peter’s Cathedral after Michelangelo’s death. Others maintain that the Garden of Monsters was actually designed by Michelangelo himself near the end of his life. Regardless of its designer, no new sculptures were added after Orsini’s death in 1584—at which point the Garden of Monsters slipped into disrepair for hundreds of years before finally being restored in the 1950s.

Of the fanciful constructions that haunt the Garden of Monsters are statues of Cerberus, Pegasus, an elephant with a castle on its back and a Roman soldier clutched in its trunk, a turtle bearing a woman atop its shell, a giant man—possibly Hercules—brutally ripping his enemy in half, and a dragon at war with two lions. There’s also a low tower known as the “Leaning House,” built on inclined rock and dedicated to Cardinal Cristoforo Madruzzo, a friend of Orsini’s. 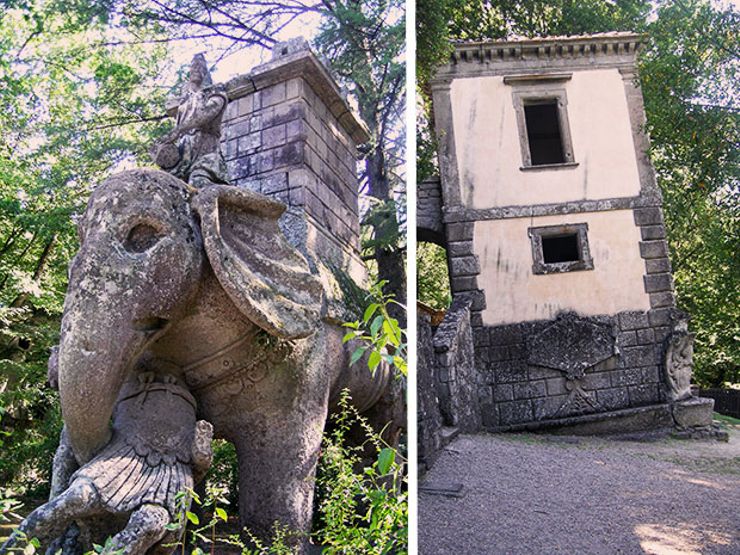 In the decades that the site sat in abandonment, stories spread about real-life beasts that dwelled in the haunted forest. The inspiration behind such tales is easy to understand. Imagine wandering through the darkened wood only to come face-to-face with one of these bizarre creatures.

Related: THE GLOOMY GHOSTS OF THE WITCH’S CASTLE

Perhaps the most striking—and by far the most famous—of the garden’s strange residents is the massive carving commonly known as the “Orcus mouth” (at top), named after the Roman god of the underworld. With its piercing eyes and fanged, gaping maw, it makes for a striking image, and has appeared in several movies, including Castle of the Living Dead, starring Christopher Lee, and the 1985 film The Adventures of Hercules.

On its upper lip is the inscription “All Thoughts Fly,” which may refer to the fact that the carving was designed so that even a whisper made inside can be clearly heard at the foot of the steps that lead into the mouth. 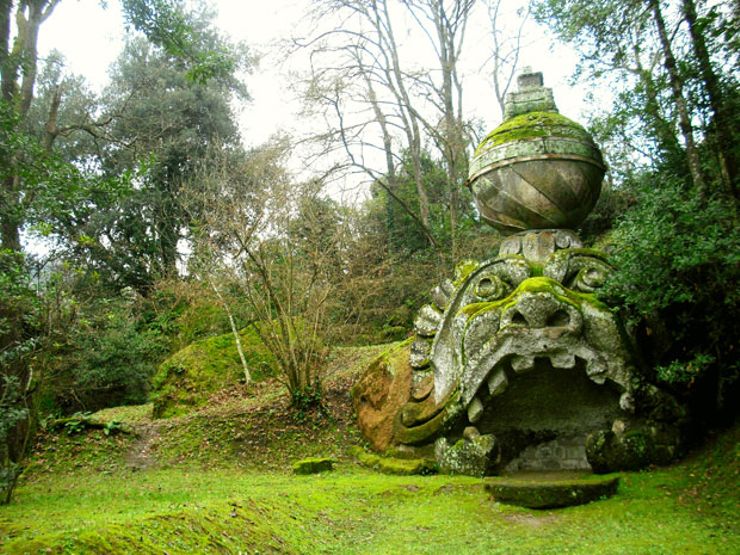 The last item added to the garden before Orsini’s death wasn’t a strange beast, but a temple. Built 20 years after the completion of the rest of the garden, it was dedicated to the memory of Orsini’s second wife. Perhaps such a structure meant that the Garden of Monsters helped Orsini finally excise the demons that had plagued him for years.

In either case, he succeeded in leaving behind a strange and wondrous place that would haunt the dreams—and nightmares—of its future visitors.