Se7en meets Silence of the Lambs in this acclaimed serial killer thriller.

Promoted by Houghton Mifflin Harcourt | By The Lineup Staff | Published May 29, 2018

He had toyed with them. Never left a clue behind. Only the boxes. A ghost.

For years, a disturbed and brilliant murderer has stalked the streets of Chicago. Known as the Four Monkey Killer, he’s claimed seven lives thus far—leaving behind neatly severed pieces of each victim as a grisly memento of his handiwork.

Chicago's on edge; authorities are baffled. Then, early one morning, Detective Sam Porter, the lead investigator on the 4MK task force, receives a shocking phone call: a city bus just hit a pedestrian, and the victim may be the Four Monkey Killer.

Detective Porter races to inspect the body of the phantom who has haunted him for years. Yet it soon becomes clear that the killer's game continues even in death. Clues point to a fresh victim—one who may still be alive. Can Porter and his team find her before it's too late?

Billed as a twisted mix of Se7en and Silence of the Lambs, author J.D. Barker “ingeniously blends horrific images into a bizarre plotline to create this devilishly dark thriller” (Library Journal).

Read on for an excerpt of The Fourth Monkey, and then purchase the book. 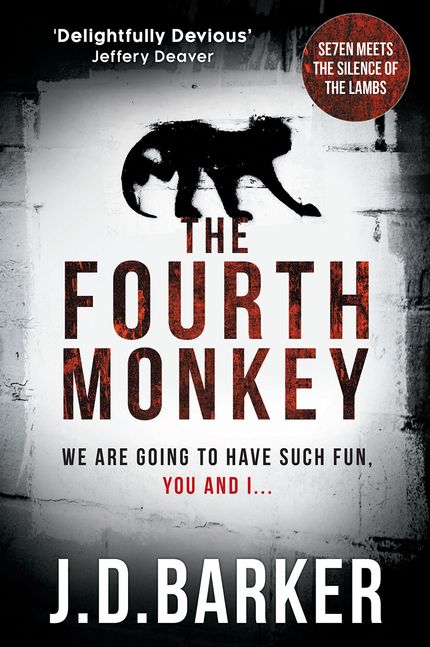 Porter found himself staring down at the body, at the lumpy form under the black plastic shroud.

Nash asked the other officers and CSI techs to step back and give Porter space, to give him time alone with the victim. They shuffled back behind the yellow crime-scene tape, their voices low as they watched. To Porter, they were invisible. He only saw the black body bag and the small package lying beside it. It had been tagged with number 1 by CSI, no doubt photographed dozens of times from every possible angle. They knew better than to open it, though. They left that for him.

How many boxes just like it had there been now?

A dozen? No. Closer to two dozen. He did the math. Seven victims. Three boxes each. Twenty-one.

Twenty-one boxes over nearly five years. He had toyed with them. Never left a clue behind. Only the boxes. A ghost. Porter had seen so many officers come and go from the task force.

With each new victim, the team would expand. The press would get wind of a new box, and they’d swarm like vultures. The entire city would come together on a massive manhunt. But then the third box would eventually arrive, the body would be found, and he’d disappear again. Lost among the shadows of obscurity. Months would pass; he’d fall out of the papers. The task force dwindled as the team got pulled apart for more pressing matters.

Porter was the only one who had seen it through from the beginning. He had been there for the first box, recognizing it immediately for what it was—the start of a serial killer’s deranged spree. When the second box arrived, then the third, and finally the body, others saw too.

It was the start of something horrible. Something planned. Something evil. He had been there at the beginning. Was he now witnessing the end?

“We haven’t opened it yet,” Nash replied. “But I think you know.” The package was small. Approximately four inches square and three inches high.

Wrapped in white paper and secured with black string. The address label was handwritten in careful script. There wouldn’t be any prints, never were. The stamps were self-adhesive—they wouldn’t find saliva.

He glanced back at the body bag. “Do you really think it’s him? Do you have a name?”

Nash shook his head. “No wallet or ID on him. He left his face on the pavement and in the bus’s grill. We ran his prints but couldn’t find a match. He’s a nobody.”

Nash pulled a pair of latex gloves from his pocket and handed them to Porter. Porter slipped them on and nodded toward the box. “Do you mind?”

Love creepy books? Sign up for The Lineup's newsletter, and get our most thrilling reads delivered straight to your inbox.

When Porter crouched and reached for the box, one of the crime scene techs rushed over, fumbling with a small video camera. “I’m sorry, sir, but I have orders to document this.”

A red light on the front of the camera blinked to life, and the tech nodded. “Go ahead, sir.”

Porter turned the box so he could read the address label, carefully avoiding the droplets of crimson. “Arthur Talbot, 1547 Dear- born Parkway.”

“Talbot’s an investment banker,” the CSI tech replied. “Heavy into real estate too. Lately he’s been converting warehouses near the lake- front into lofts—doing his part to force out low-income families and replace them with people who can afford the high rent and Starbucks grandes on the regular.”

Porter knew exactly who Arthur Talbot was. He looked up at the tech. “What’s your name, kid?”

“I’m not a doctor, sir. I’m working on my thesis, but I’ve got at least two more years to go.”

He tugged at the string and watched as the knot unraveled and came apart. The white paper beneath had been neatly folded over the corners, ending in perfect little triangles.

The paper came away easily, revealing a black box. Porter set the paper and string aside, glanced at Nash and Watson, then slowly lifted the lid.

The ear had been washed clean of blood and rested on a blanket of cotton.