What Movies Were You Watching 20 Years Ago?

Bruce Willis died hard (with a vengeance) and Nicole Kidman was a woman to die for. Take a look back at the best and worst films from 1995.

It’s hard to imagine panning the action film Die Hard with a Vengeance or feeling outraged at the now-famous ending of Seven, but 20 years ago, film critics had a field day with these 90’s classics.

We found this best and worst film list in a back issue of mystery fiction magazine The Armchair Detective, and we had to share the walk down memory lane. What were you watching 20 years ago? And what which of these films would you still watch today?

FROM THE ARCHIVES: This column by Ric Meyers, originally titled The Crime Screen, first appeared in The Armchair Detective Vol. 29 Issue 2, Spring 1996. 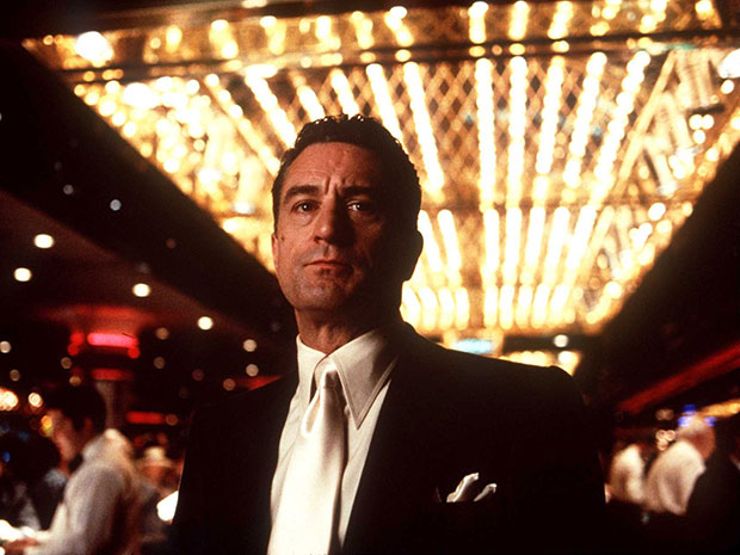 Everyone I know who’s seen this has hated it. Admittedly overlong, redundant, following the same director’s (Martin Scorcese) superior Goodfellas, profane, and hyperviolent, it still managed to creep up and cold-cock me when I wasn’t looking. Although I sat mentally criticizing everything during the unreeling (geez, that didn’t have to be so graphic; boy, they could’ve trimmed this segment, etc.), many of the film’s images stayed with me and I left the theater feeling that Sorcese had captured an important part of our hypocritical history. I also shamefully recognized the childish, hopeful emotions which led to the mob losing Las Vegas and Robert DeNiro’s character losing his job, wife, and best friend. Behind the history was a love triangle which failed because each character was trying to see something in the other that simply wasn’t there. I don’t suggest this movie to anyone but the serious cinephile, but to them I recommend it wholeheartedly. 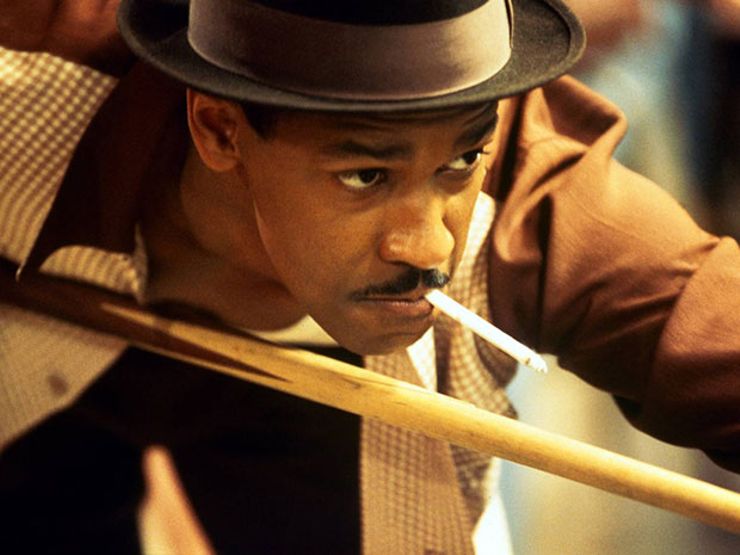 2. Devil in a Blue Dress

What was hoped to be a film franchise for Denzel Washington was scuttled because of poor box office, cementing racist Hollywood’s contentions that a solo black star cannot sustain a hit movie. Perhaps to soft for the hardcore action audience and too worrisome for the mall-goers, this first Easy Rawlins film, adapted from the books of Walter Mosley by Carl Franklin, fell through the cracks, despite almost unanimous praise. It will hopefully find new life on video and cable, where no one has to worry about who they are sitting next to, and where bigoted execs can consider it an “exception.” 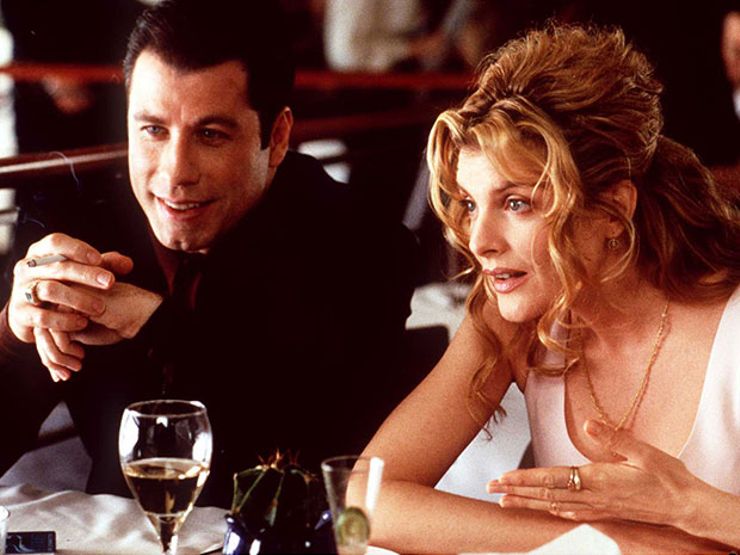 John Travolta cements his comeback status by starring in a clever, extremely enjoyable movie that is not only a follow-up to Pulp Fiction, but is also, in part, its inspiration. Quentin Tarantino has admitted his fondness for the works of Elmore Leonard and may even adapt another Leonard novel when he decides to return to directing, but this one – directed by Barry Sonnenberg, the man who helmed the Addams Family movies – will do in the interim. Danny DeVito produces, and was even tempted to star, in this tale of a small-time East Coast loan shark enforcer who goes west to collect a debt, only to find his talents more suited to producing movies. DeVito was content to let Travolta walk wonderfully through the main part, and took the supporting title role (supposedly inspired by Dustin Hoffman) of a short actor who needs to be coddled every second. There are a lot of “refrigerator moments” (a phrase coined by Hitchcock to describe illogical content disguised by style – so that it’s only when the viewer is back home leaning down to get something from the fridge that he or she says “wait a minute…!”), but also a lot of smiles, nods, and appreciation for the clever way it is all laid out. 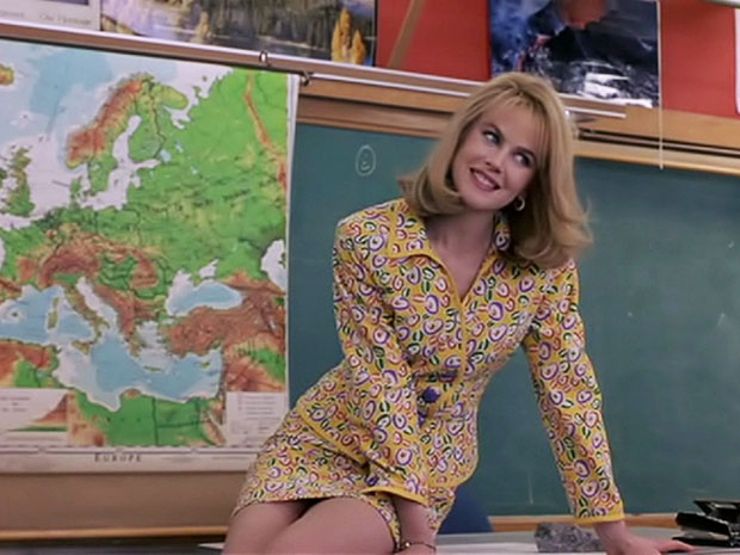 Everyone touts star Nicole Kidman here, deservedly praised for her portrayal of a shallow beauty who will do anything – including murder – to become a television star, but the real deal is screenwriter Buck Henry, who quietly fashioned a sly masterpiece with the participation of new wave director Gus Van Sant as well as Kidman. To give you an idea of just how impressive their achievement, here is a movie that totally condemns the media, that was championed by that self-same media. This was everything Natural Born Killers said it was (but actually wasn’t) and a lot more. 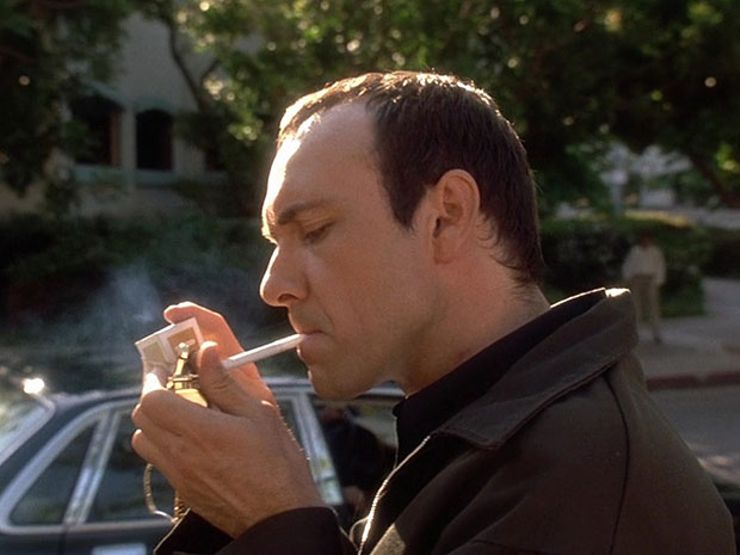 Part play-unfair whodunit, part film noir, and all fascinating, this is a movie’s movie, creating an unusual collaboration between filmmaker and audience. My state contention in the previous column stands: have a Usual Suspects video party with your own favorite usual suspects; watch; discuss. It can be better than Pictionary and Balderdash put together. 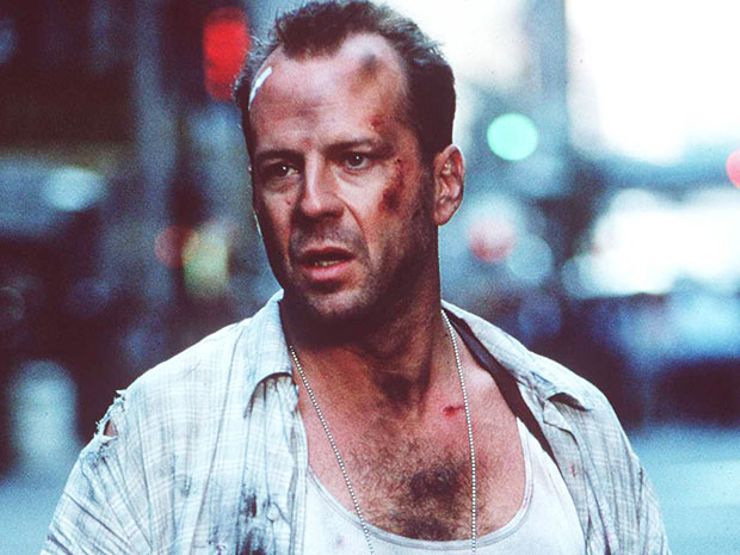 1. Die Hard with a Vengeance

I feel terrible for John McTiernan. Once an action film icon for his direction of Predator and the original Die Hard, this sequel completes his fall from grace that started with the irritating Medicine Man and continued with the infuriating Last Action Hero. Now comes this feather-brained insult that suggests – with its mounting coincidences, contrivances, and impossibilities – that no one behind the camera cared for anything or anyone in the least. Bruce Willis let his suffering, believable John McLane character be changed into just any drunken, wise-cracking, invulnerable reckless-endangerment-to-public-safety, while Samuel L. Jackson stood in for Danny Glover in this pale plagiarism of the Lethal Weapon series. A deeply cynical and disappointing retread. 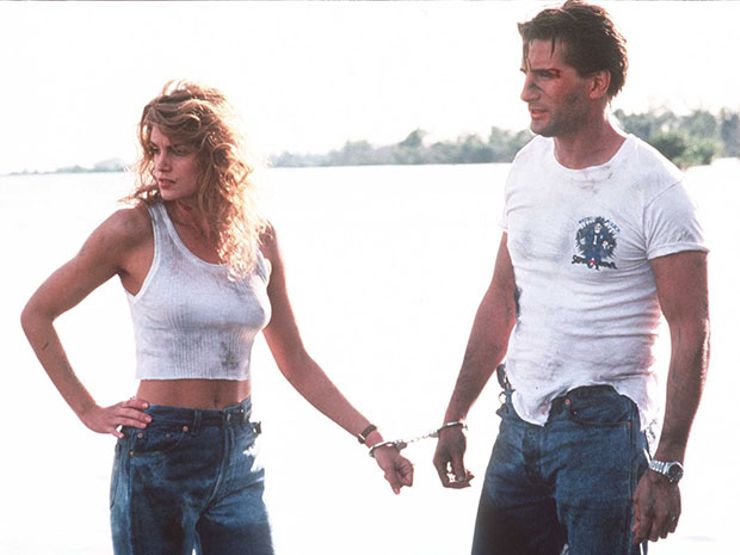 I believe I’m the only reviewer who doesn’t lay the failure of this movie directly at the well-shaped feet of Cindy Crawford. As written, even Sarah Bernhardt in her prime could not have pulled off the shallow cliches that passed for plot, motivation, and dialogue in this contrived, obvious attempt at putting another one over on the action audience. Being a novice, Cindy’s flaw was not doing what any self-respecting actor would have done with the same material: namely tell them to call her again when it was rewritten for real, believable, likeable characters (as Keanu Reeves reportedly said after reading the first bon-mot-laden draft of Speed: “I think we can do better than this.”) Instead, like the good, somewhat insecure girl she is, she put herself in the hands of schlockmeister Joel Silver, who gave her the tattered remainders of almost every other bad movie of the ’90s. Sad, but ultimately triumphant in that the audience they were sure would swallow this tripe spit it out in their faces. 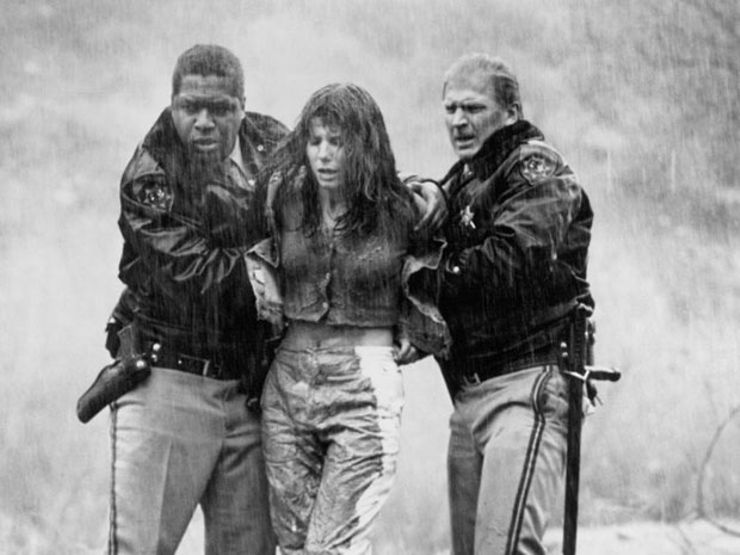 3. The “Internet” Movies: Hackers, The Net, Strange Days, and Virtuosity

Someone in Hollywood obviously thought that the most thrilling thing they could show in modern movies was that scintillating endeavor known as “typing.” At first, I thought my dislike of the former two titles came directly from my hatred of computer keyboard sound effects. Yup, fingernails on a blackboard have no effect on me, but let anyone on screen tap-tap-tap away on PC keys and I cringe big-time. Thankfully, the rest of the world was also running from these misconceived sagas of noble young folk fighting programming demagogues. They were also eschewing such big budget Lawnmower Man-knockoffs as the latter two titles, which play fast and loose with computer possibilities to fashion mean-spirited, empty exercises in pretension. Here’s a much better idea, for free: Do a movie called Inter-Dragnet with two monosyllabic computer cops who seek to wipe out smut on the Worldwide Jack Webb. Cool, huh? 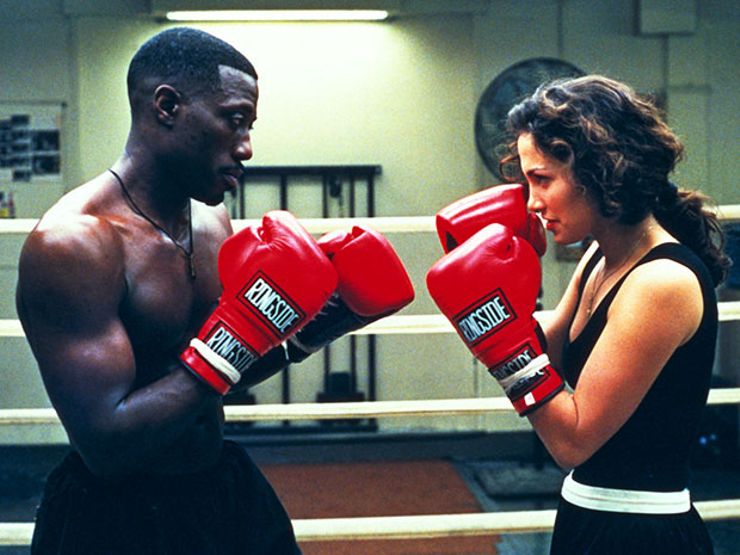 A painfully underwritten, seemingly slapped together buddy-cop picture which was promoted as a copy of Speed, but should have actually been called Slow. Things are already pretty skewed when the “good” guys are a pair of interracial foster brothers who seek to rob the transit cops’ payroll and the “bad” guy is the top cop assigned to keep that payroll safe. Now there’s a classic Hollywood approach to endearing themselves to an audience. They never get close to getting over this identity crisis, and its death knell could be heard echoing in empty cinemas throughout the country. 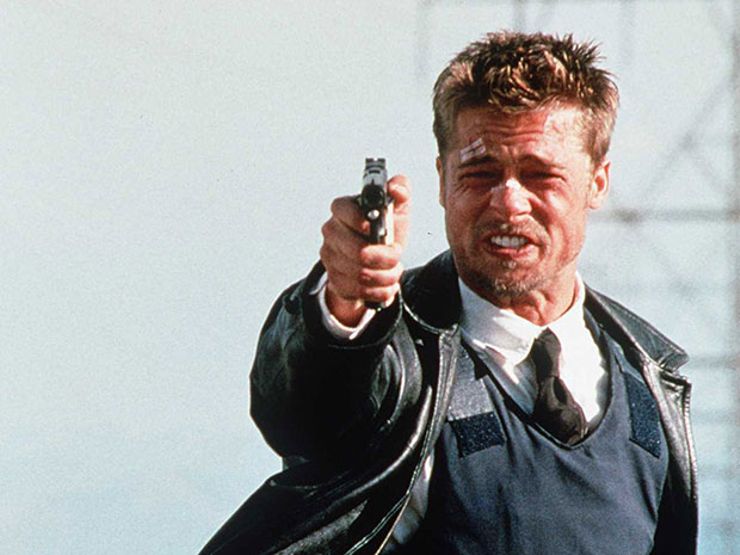 Speaking of mean-spirited, not to mention hateful, here comes a movie (along with Strange Days) that proves beyond the shadow of a doubt that the ending is everything. It matters not how interesting the first hour is, if it doesn’t pay off at the climax, you’ve got nothing (for further evidence, see 95% of the movies in 1994). Don’t get me wrong: Seven‘s climax pays off, in spades, but it is such a bleak, despairing, tragic, unnecessary conclusion that it either sends you out of the theater gasping, chilled, titillated, or, in my case, infuriated. As a “haunted house” freak show it certainly delivers, but its lesson (like movies such as The Omen) is negative: you can’t win, cops are fools, serial killers are swell, all innocence is punished, etc. Not for me, thanks. I’m going back to Casino.