From special investigators to convicted killers, meet the real-life people behind your favorite crime show characters.

Criminal Minds follows a team of FBI behavioral experts as they hunt down the country’s most twisted killers. Supervisory Special Agent Jason Gideon (left) drives the team with his experience and expertise as one of the founders of the Behavioral Analysis Unit (BAU).

Real-life criminal psychologist John E. Douglas (right), a former FBI agent and one of the first criminal profilers, is the confirmed inspiration for the character Jason Gideon. In 1977 Douglas joined the FBI’s Behavioral Sciences Unit and began teaching applied criminal psychology to law enforcement all over the country, giving them a valuable tool for busting bad guys. He went on to create and manage the Criminal Profiling Program and later became the unit chief of the Investigative Support Unit, part of the FBI’s National Center for the Analysis of Violent Crime. During his travels, Douglas interviewed some of the nation’s most notorious killers: John Wayne Gacy, Ted Bundy, and Charles Manson, just to name a few. From his research, Douglas developed his Crime Classification Manual and furthered his criminal profiling. Although the Jason Gideon character is gone for good from Criminal Minds, Douglas’s career is going strong. Today, Douglas is a bestselling author of many books, both fiction and nonfiction. 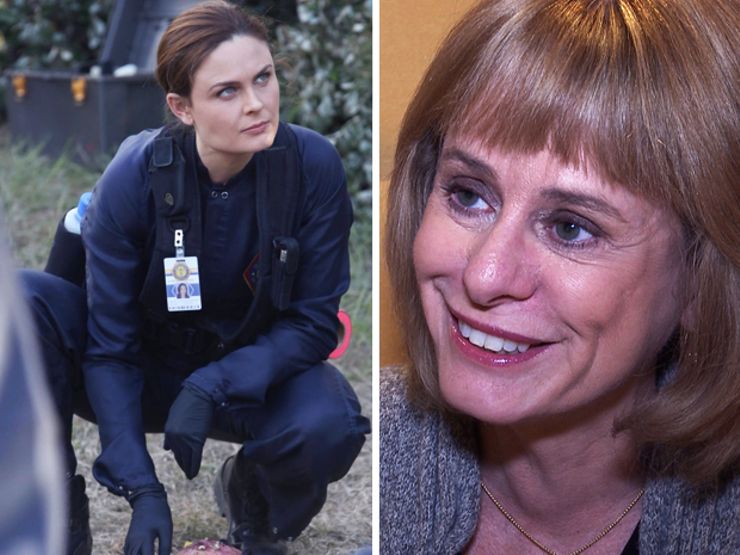 Bones features forensic anthropologist Dr. Temperance “Bones” Brennan (left) and her team of scientists as they use their skills to help FBI Special Agent Seeley Booth crack the case. When remains are too broken down or burned up for traditional analysis, Bones studies the skeletons to reveal evidence invisible to the untrained eye. When she isn’t catching killers, Bones writes crime novels starring the character Kathy Reichs.

The real Dr. Kathy Reichs (right) is a forensic anthropologist and author—just like Bones. With a PhD in physical anthropology, Reichs has taught at multiple universities as well as consulted for the Office of the Chief Medical Examiner in North Carolina. In her line of work, Reichs gets up close and personal with the remains of victims, although she doesn’t actually question suspects or go undercover as Temperance does. Like the TV character, though, Reichs has testified as an expert witness in high profile cases such as the International Criminal Tribunal for Rwanda and the Casey Anthony murder trial. When she isn’t in the lab or assisting in the exhumations in the highlands of Guatemala, Reichs works on her bestselling Temperance Brennan series—crime books based on her own life as a forensic anthropologist. 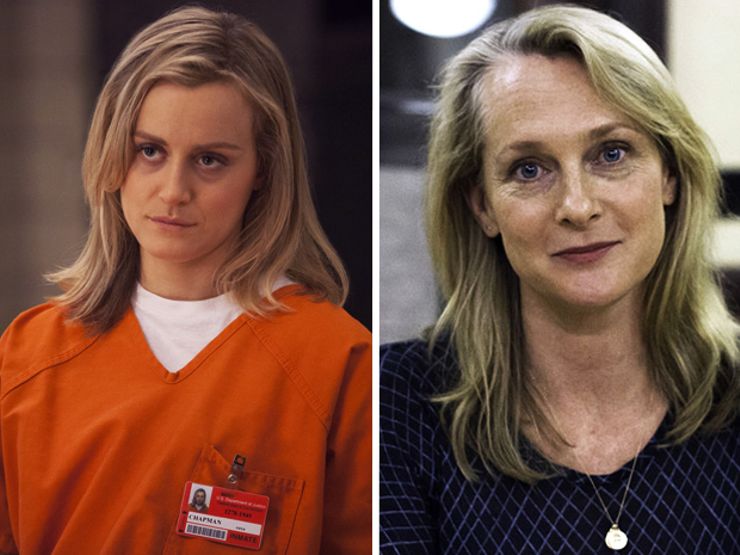 3. Piper Chapman from Orange Is the New Black
& Piper Kerman

Orange is the New Black tells the story of Piper Chapman (left) and her time in a women’s prison. Ten years after helping her then-girlfriend smuggle drug money, Piper is convicted and must learn how best to survive at Litchfield Penitentiary.

Piper Kerman (right), former inmate of Federal Correctional Institution, Danbury, is the author of Orange Is the New Black: My Year in a Women's Prison . Like the TV version of herself, Kerman was convicted of drug-related crimes years after they had been committed and left a comfortable life for a 15-month sentence. Although Kerman did have a romantic relationship with a woman working for an international drug ring, their relationship both in and out of prison was not the same as that of characters Piper Chapman and Alex Vause (based on real-life Cleary Wolters). Since the success of her memoir and the resulting TV series, Kerman has spoken to many students, including those studying criminology, women’s studies, and creative writing. She has also been invited to speak to federal probation officers, justice reform groups, and both formerly and currently incarcerated people. Kerman currently serves on the board of the Women’s Prison Association. Piper Chapman, on the other hand, will be locked up for at least another season. 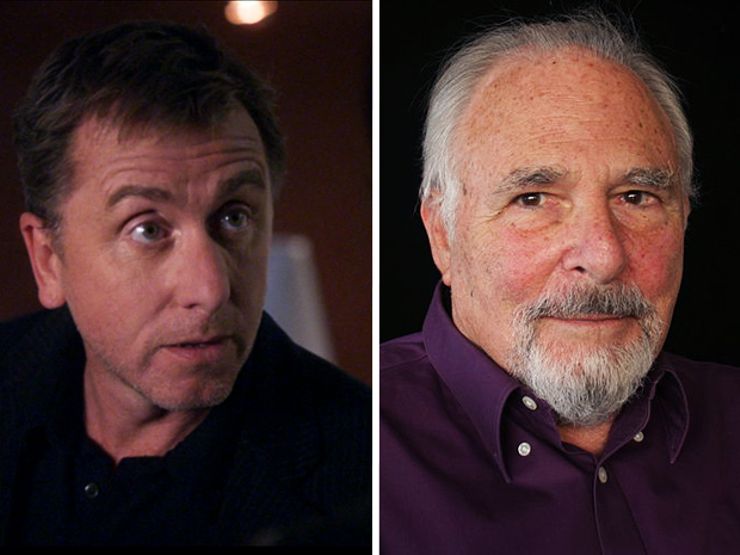 Lie to Me is centered on The Lightman Group, a team of body language scientists, capable of interpreting the smallest facial tics—a microexpression. The team is led by Cal Lightman (left), the world’s leading scientist in the field. With their incredible observational skills, the team aids in investigations of all kinds.

In real life, Dr. Paul Ekman (right) is the world’s best human lie detector. The founder of the Paul Ekman Group (PEG), Ekman is a pioneer in the study of emotions and their relation to facial expressions. Unlike Lie to Me’s version of the group, PEG doesn’t accept individual cases, although Ekman has served as an advisor to police departments and anti-terrorism groups. The PEG does, however, provide tools and training for those who would like to better understand emotions and facial expressions. Over the course of his research, Ekman has created an “atlas of emotions” that includes more than ten thousand facial expressions. He also spent time as a professor at the University of California, San Francisco where he met colleague Dr. Maureen O’Sullivan, on whom the character Dr. Gillian Foster is based. Just to make sure Lie to Me kept the science honest, Ekman worked as a scientific consultant in the production of the show. 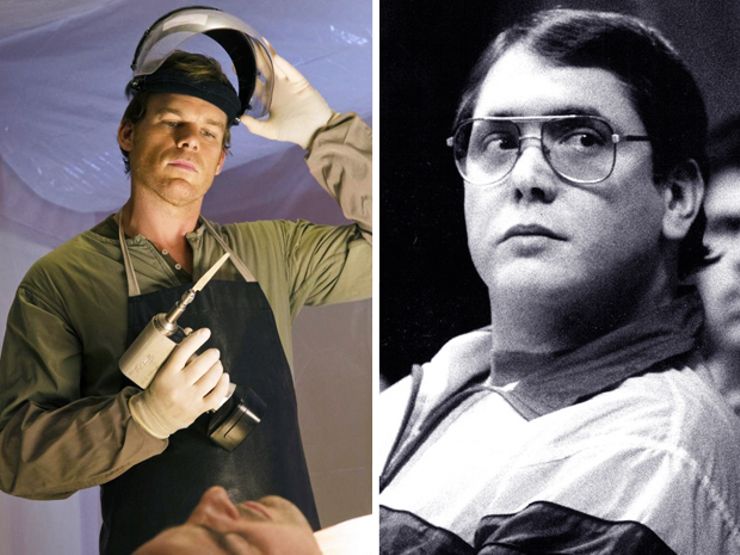 Dexter Morgan (left) is the titular character in Dexter, a show featuring a blood spatter pattern analyst for the Miami Metro Police Department who also happens to be a serial killer. But Dexter kills by the code: only kill despicable people fall prey to his deadly skills and he never leaves evidence.

Real-life murderer Manuel Pardo (right) may not be the actual inspiration behind Dexter Morgan, but his criminal activity was similar enough to earn him the nickname “The Real Dexter Morgan.” Pardo began his career in law enforcement in the 1970s, and although he had some troubles, overall, he seemed to be a decent cop… until he told a giant lie in a trial on behalf of a colleague. In 1986, two years after Pardo’s cop days had ended, he killed nine people over the course of 92 days. He took pictures and recorded details of his kills in a diary. Pardo was caught when he used a victim’s credit card and then shot himself in the foot during the last murder—he wasn’t quite as careful as his TV counterpart. During the trial, Pardo admitted to the kills, feeling his actions were justified because every victim was a drug dealer who didn’t deserve to live. According to this cop-turned-murderer, he had done society a favor.