Crime and No Punishment in Prohibition-Era New York

In 2005, I went to work on a non-fiction book, American Murder: Criminals, Crime and the Media. The idea was to look at the most famous criminal cases and examine the difference between what really happened and how those crimes were treated in popular culture.

At the time, I was living in New Jersey, a short train ride from Manhattan, and I realized that many of the places where the major events of the Prohibition years occurred were still there. Yes, the city has changed, but some of the “old” New York still exists if you look closely. You can stay in the hotel where Arnold Rothstein was gunned down. The drug store where Vincent “Mad Dog” Coll was killed is now a pet store but the address is the same.

Visiting these sites made the people involved in the crimes seem more real, and I simply wanted to know more about them. For openers, I was surprised to realize how young these guys were. Meyer Lansky was a teenager when Prohibition began. Charlie Luciano, later “Lucky” Luciano, was 23. They started out as street kids and by the time Prohibition was repealed, they were wealthy men who controlled large criminal enterprises. 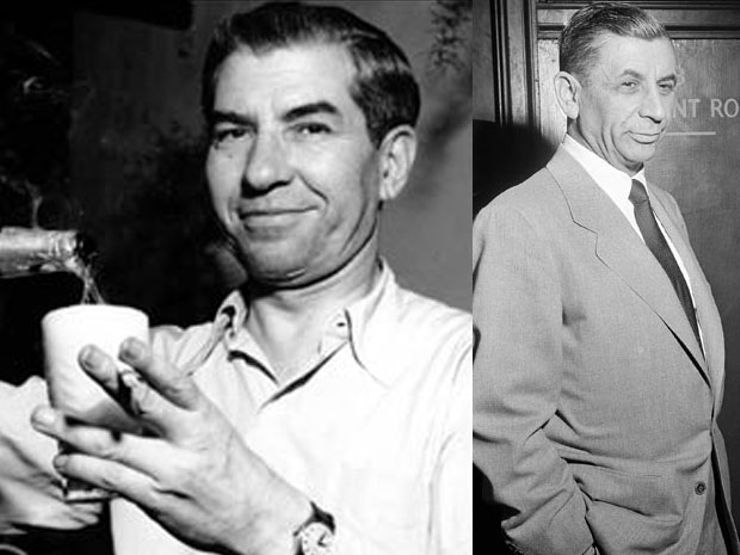 We often see photographs of these two taken from sullen mug shots. These pictures came from their later years, Charlie (left) in 1949; Meyer (right) probably in the 1960s or 50s. Unlike many of their contemporaries, both men lived into their sixties and died of natural causes.

From the very beginning, men and women in the booze trade attracted a lot of attention, and they were very careful about how they were portrayed. They were happy, even eager to talk about their involvement with alcohol and gambling, but they seldom had much to say when it came to the drugs or prostitution,in which many of them traded, not to mention the raw violence that was part of it all.

They made themselves out to be the good guys, and there were plenty of writers and broadcasters who were happy to help them. The mass media — national magazines, radio, news reels, motion pictures — were new then, and even more established and responsible newspapers were interested in building circulation through sensational stories. Simply setting out facts didn’t cut any ice, and it didn’t work for me, either. I wanted the freedom that fiction allows to tell my version of those days. The approach also gave me the excuse to do more research on the places and people who made those days so “smart.”

Michael Mayo is the author of the Jimmy Quinn Mysteries set in Prohibition-era New York. His second book in the series, Everybody Goes to Jimmy's, was released this month. He has also written several books about film.