The Disturbing Facts About the Unsolved Colonial Parkway Murders

Will we ever have an answer?

Virginia’s Colonial Parkway runs a relatively short 23 miles, from Jamestown to Yorkstown, passing through Williamsburg and thereby connecting all of Virginia’s famous “Historic Triangle.” Part of the Colonial National Historic Park, the scenic route is designed with sightseeing in mind. The pavement itself lacks the usual lane markers, while bridges that cross the road are made of brick and built to look as if they were constructed during the colonial period for which the parkway is named.

While the route was created to allow visitors to enjoy the region’s natural beauty and historic interest, it has since attained a more sinister history of its own. For three years, between October 1986 and September 1989, at least eight people were killed or went missing along this short stretch of scenic road. Then, just as mysteriously, the killing stopped.

Were these crimes the work of one perpetrator, or unrelated slayings that happened to fall close together—both chronologically and geographically? Who was responsible, and why? And why did the horror stop as abruptly as it had begun? These are all questions that remain unanswered, more than thirty years later.

10 Serial Killers Who Were Never Caught

The first two victims in what became known as the “Colonial Parkway murders” were Cathleen Thomas and Rebecca Ann Dowski. On Columbus Day weekend in 1986, their bodies were found in a white Honda Civic parked at one of the many scenic overlooks which dot the Colonial Parkway. Their deaths had been brutal. Their throats were slashed so deeply that Thomas was “nearly decapitated.”

Autopsies performed on the bodies found that both women had been bound and strangled before their deaths, and afterward, the car and the bodies had been soaked in diesel fuel. Authorities suspect that the perpetrator planned to burn the car and its contents to cover their tracks, but for whatever reason never did. No motive for the killings was ever established. There was no sign of sexual assault, and the women’s purses were still in the car, with all their money still inside.

Unfortunately, this was the beginning of a nightmare, not the end of one.

The Strangest True Crime Cases in States Across the Country

It was nearly a year later when the second slaying took place along the Colonial Parkway. Like all of the so-called Colonial Parkway murders, this was a double homicide. In this case, the victims were 20-year-old David Knobling and

14-year-old Robin Edwards. Both were found shot to death in the Ragged Island Wildlife Management Area on the south shore of the James River, near the small town of Smithfield—known as the “Ham Capital of the World."

Though located several miles to the south of the Colonial Parkway itself, the unsolved killings of Knobling and Edwards are often grouped together with the other Colonial Parkway murders. Knobling’s truck, a black Ford Ranger, was actually found before the bodies were, parked near the James River Bridge with the windshield wipers and radio both turned on.

Almost seven months passed before the next incident—the only one of the four in which the presumed victims have never been found. Cassandra Lee Hailey and Richard Keith Call were two students at Christopher Newport University who had just gone on their first date together in the University Square neighborhood of nearby Newport News. They were reported missing on April 10, 1988, and Call’s red Toyota Celica was found at the York River Overlook along the Colonial Parkway on April 11. No sign of either of the two young people has ever been recovered.

The grim finale came just five months later. On September 5, 1989, Annamarie Phelps and Daniel Lauer were driving to Virginia Beach when they disappeared. The gold Chevy Nova that Lauer had been driving showed up at a rest stop in nearby New Kent County, where it appeared to have been heading in the wrong direction for their ostensible destination. For more than a month, there was no indication of what had become of Phelps and Lauer, and it seemed that they might join the ranks of the missing, alongside Hailey and Call.

Then, on October 19, hunters discovered two bodies on a logging road near Interstate 64, between Williamsburg and Richmond, about a mile from the rest stop where the car had been found. They were covered by an electric blanket taken from Lauer’s vehicle, and Annamarie Phelps appeared to have been stabbed to death. However, both bodies were badly decomposed by that time, rendered down to little more than skeletons, making it difficult to determine just what, if anything, had become of them.

They were the final victims of the killer or killers plaguing the Colonial Parkway—or were they?

In 2010, families of the victims hired retired homicide detective Steve Spingola to look into the murders. His conclusions were that the Colonial Parkway slayings were committed by several different individuals, for different reasons.

The first of the killings, that of Cathleen Thomas and Rebecca Ann Dowski, he said, was a hate crime, committed by someone who targeted lesbian couples. What’s more, he believed that the same killer was responsible for the 1996 murder of Lollie Winans and Julianne Williams, another couple who were killed in a similar fashion while camping in Shenandoah National Park. Like Thomas and Dowski, Winans and Williams were bound and had their throats slit nearly to the point of decapitation.

Whether this additional double homicide, which took place some seven years after the last of the “Colonial Parkway murders,” is actually the work of the same killer or not—or whether there was more than one, unrelated killer involved in the slayings along the Colonial Parkway—are questions that may never be answered. No charges were ever filed in relation to any of the killings, and to this day they all remain unsolved, despite numerous investigations into the various deaths which took place along the scenic route.

The killings have been the subject of a variety of TV specials and docuseries, as well as the book A Special Kind of Evil: The Colonial Parkway Murders by father-daughter writing team (and New York Times bestselling authors) Blaine Pardoe and Victoria Hester. To date, the book is probably the most exhaustive source for information about the crimes, which continue to make headlines even years later.

A Special Kind of Evil 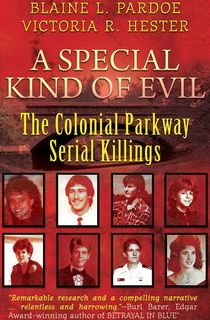 12 Dark and Disturbing Nonfiction Books to Satisfy Your Morbid Curiosity

In 2009, it was revealed that several crime scene photos from the case had been leaked to the public and were being used as training materials for a security firm. The whistleblower who broke the story was a former deputy by the name of Fred Atwell. However, Atwell had his own skeletons, and soon had several brushes with the law. As he tried to ingratiate himself with the families of the victims of the Colonial Parkway murders, he instead left them wondering if he had some ulterior motive.

“I often wonder if he knows something he is not telling us,” Bill Thomas, the brother of one of the first victims, told the Huffington Post. “If he does, I hope he comes forward with that information soon.”