The truth is beyond what anyone could guess.

A good haunted house story puts our sixth sense on high alert—and this one is no exception.

After Seymour Wallis moves into 1551 Pilarcitos, it doesn’t take long to realize something is wrong. His new home is making sounds that no house should—deep breaths whisper through the corridors, a slow heartbeat thrums within the walls.

Wallis seeks help for what he believes must be an animal trapped in the walls, but the truth is beyond what anyone could guess. And it’s not long before 1551 Pilarcitos unleashes something much, much worse than a few unsettling noises.

As horrifying as it is spellbinding, Graham Masterton’s Charnel House is a haunted house novel that will get your spine tingling in no time. 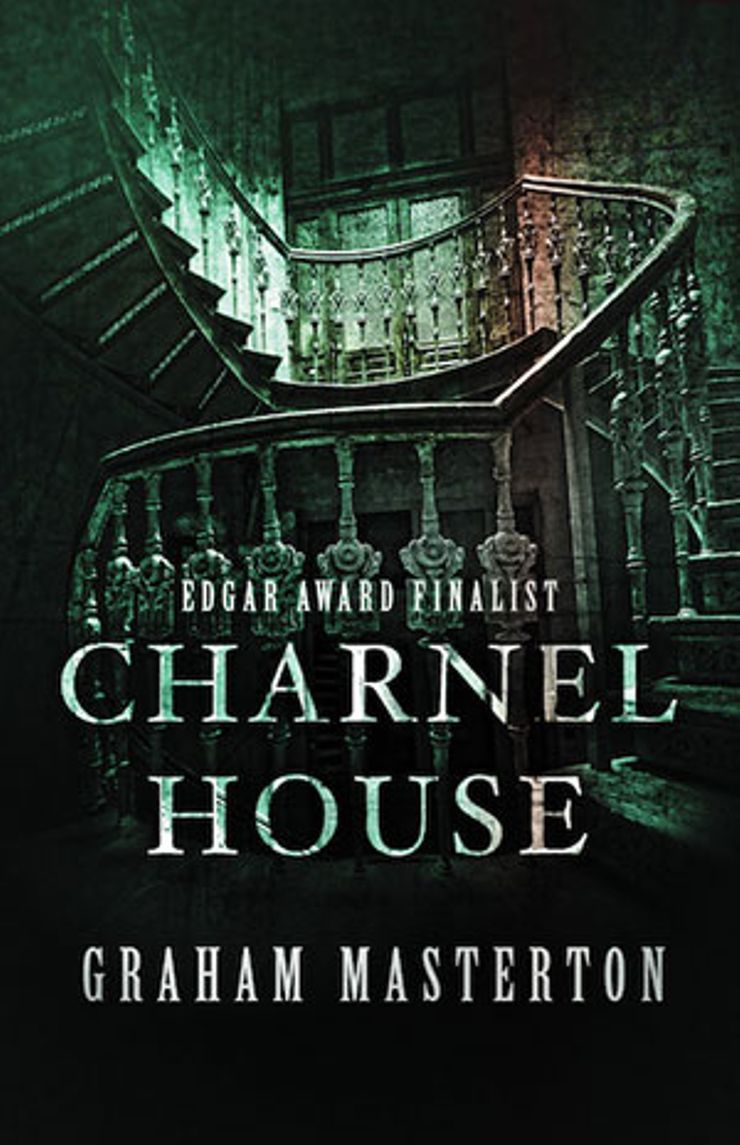 With Bryan leading the way, we trod as quietly as we could up the old, squeaking staircase. There were two flights of about ten stairs each, and then we found ourselves on a long landing, illuminated by another dingy glass shade, and carpeted in dusty red. It didn’t look as if the house had been decorated for 20 or 30 years, and all around was that pervasive silence and that moldering smell of damp.

“The study chimney must come up through this room,” said Bryan, and led us across to a bedroom door that was set at an angle on the opposite side of the landing. He turned the brass handle and opened it up.

The bedroom was small and cold. It had a window that overlooked the yard, where dark wet trees rose and fell in the wind and the rain. There was pale blue wallpaper on the walls, stained brown with damp, and the only furniture was a cheap varnished wardrobe and a shabby iron bed. The floor was covered with old-fashioned linoleum that must have been green many years ago.

Bryan went across to the fireplace, which was similar to the fireplace in Seymour Wallis’s study, except that someone had painted it cream. He knelt down beside it, and listened, and the rest of us stood there and watched him.

“I think so,” he said, straining his eyes to see up into the darkness. “I just need to see round the ledge and I might be able to …”

He shifted himself nearer and cautiously poked his head up under the hood of the fire.

Dr. Jarvis laughed, but it was a nervous kind of a laugh. “Can you see anything?” he asked. 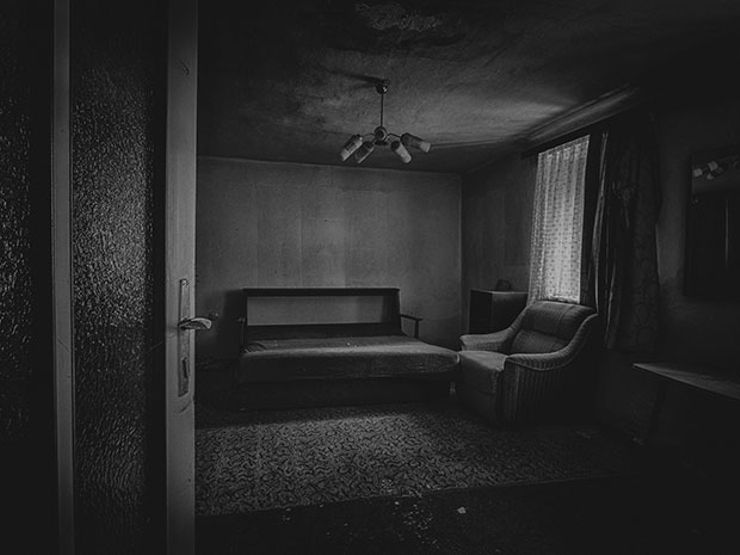 “I’m not sure,” Bryan answered in a muffled voice. “There’s a different kind of resonance here. Some sort of thudding noise. I’m not sure if it’s echoing down the chimney or if it’s vibrating through the whole house.”

“We can’t hear anything out here,” I told him.

“Hang on,” he said, and shifted himself so that his whole head disappeared up the chimney.

“I hope you don’t mind washing your hair before you come back to civilization,” said Jane.

“Oh, I’ve done worse than this,” said Bryan. “Sewers are worse than chimneys any day of the week.”

“Can you hear anything now?” I asked him, kneeling down on the floor next to the fireplace.

“Ssshh!” ordered Bryan. “There’s some kind of noise building up now. The same kind of thudding.”

He kept his head right up inside the hood of the chimney, and groped his hand around until he could touch Dr. Jarvis’s knee. Then as whatever he could hear began to thud in his ears, he beat out the time, and Dr. Jarvis checked it on his watch.

“It’s not a pulse,” commented Dr. Jarvis, after a couple of minutes. “Not a human pulse, anyway.”

“Do you have enough?” coughed Bryan. “I’m getting kind of claustrophobic up here.” 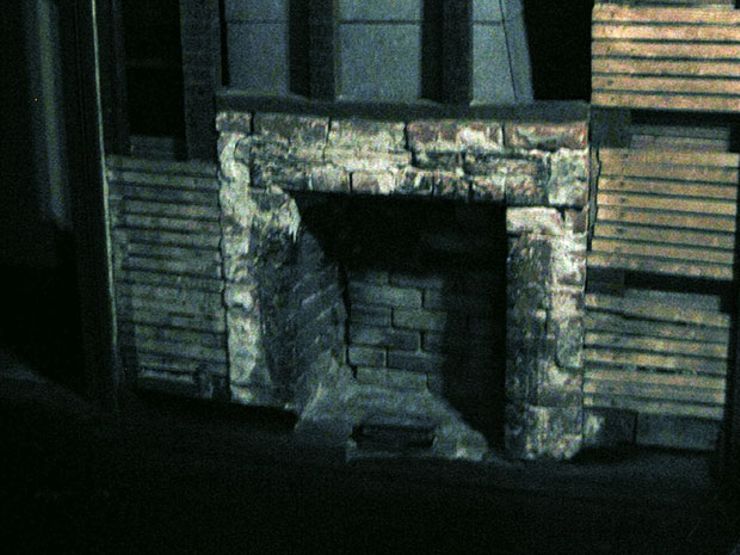 “More like Santa Claustrophobic,” joked Jane. “Will you bring a sack of toys out with you?”

“Ah, nuts,” said Bryan, and started to shift himself out.

Abruptly, horribly, he screamed. I’d never heard a man scream like that before, and for a second I couldn’t think what it was. But then he shouted, “Get me out! Get me out! For God’s sake, get me out!” and I knew something terrible was happening, and it was happening to him.

Dr. Jarvis seized one of Bryan’s legs, and yelled, “Pull! Pull him out of there!”

Freezing with fear, I grabbed hold of the other leg, and together we tried to tug him out. But even though it was only his head that was up inside the chimney, he seemed to be stuck fast, and he was shrieking and crying and his whole body was jerking in agonized spasms.

Dr. Jarvis let go of Bryan’s leg and tried to see what was happening up inside the chimney hood. But Bryan was nailing around and shrieking so much that it was impossible to understand what was going on. Dr. Jarvis snapped, “Bryan! Bryan, listen! Don’t panic! Keep still or you’ll hurt yourself!”

He turned to me. “He must have gotten his head caught somehow. For Christ’s sake, try to hold him still.”

We both got a grip on the fireplace hood and tried to wrench it away from the tiles, but it was cemented by years of dust and rust and there was no getting it loose. Bryan was still screaming, but then suddenly he stopped, and his body slumped in the fireplace.

From under the fireplace hood, soaking Bryan’s collar and tie, came a slow stain of bright red blood. Jane, standing right behind us, retched. There was far too much blood for a minor cut or a graze. It dripped down Bryan’s shirt and over our hands, and then it began to creep along the cracks in between the tiles on the fireplace floor.

Little by little, we shifted Bryan’s body downward. It seemed as if his head was still firmly caught at first, but then there was a sickening give of flesh, and he came completely out of the chimney, collapsing in the grate.

I stared at his head in rising horror. I could hardly bear to look but then I couldn’t look away, either. His whole head had been stripped of flesh, and all that was left was his bare skull, with only a few raw shreds of meat and a few sparse tufts of hair remaining. Even his eyes had gone from their sockets, leaving nothing but glutinous bone …