Researchers at the University of Tennessee, Knoxville, have completed new studies that could revolutionize the way time of death is estimated in dead bodies.

Medical examiners currently estimate time of death by physically inspecting the body for signs of decomposition and looking at evidence such as insects present—but these methods can be unreliable due to factors including temperature, weather conditions, and location.

In a study published December 22 in the journal Plos One, researchers from the Anthropological Research Facility at the University of Tennessee—also known as the “Body Farm”—examined the “necrobiomes” of 21 cadavers and found that the community of bacteria changes considerably on bodies, which could make them a more accurate way to pinpoint time of death.

Curious to learn more about the Body Farm? Check out Death’s Acre by Dr. Bill Bass on Amazon.

But “by knowing which microbes take over a dead body and how long it takes, forensic scientists might be able to use [the necrobiome] to determine time of death or other aspects of a crime scene,” Robert DeSalle, curator of molecular systematics at the American Museum of Natural History in New York, said in a statement. 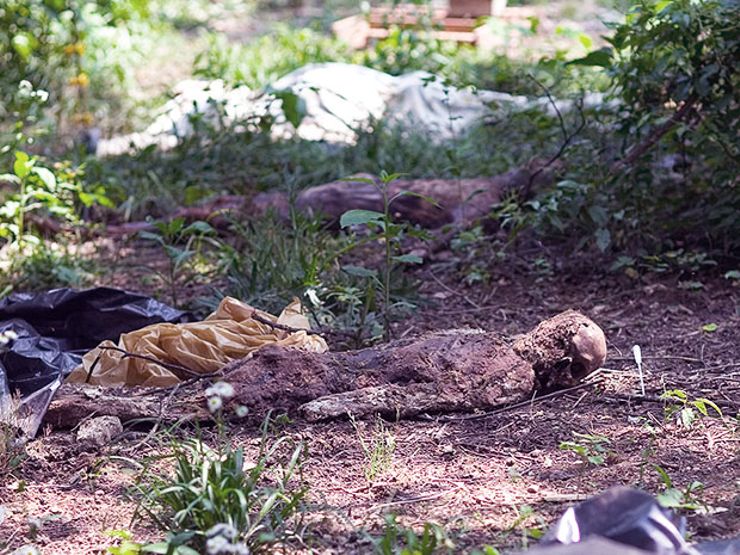 Another decaying body at the the Body Farm.

In the study, the researchers took samples of bacteria from the ear and nasal canals of the cadavers and put them outdoors, leaving them to decompose naturally over the course of several weeks. They then sequenced the DNA of the bacteria, and used their findings to construct a model that could predict a body’s time of death to up to 55 “accumulated degree-days,” which is equal to about two summer days.

Because human decomposition is strictly dependent on both time and temperature, rates of day can vary according to season. For example, one day in summer can sometimes reach two weeks in winter.

In another study, UT researchers also found that human remains decompose at different rates and patterns than do those of pigs and rabbits.

Forensic cases worldwide routinely use animal models to estimate the time since death for human remains, yet—again—those methods can yield flawed results since there are large variations in decay, insect activity, and scavenger activity between human bodies and nonhuman species, UT said in an announcement.

The study could also have important repercussions in court cases. “This research provides guidance to lawyers and judges concerning the admissibility of testimony by anthropologists and entomologists,” Dawnie Steadman, director of UT’s Forensic Anthropology Center and the project’s lead investigator, said in a statement.

For this project, researchers placed a total of 15 corpses of pig, rabbit, and human outside to assess decomposition patterns and rates over the course of three seasons. They found that, overall, human decay varies more than that of pigs or rabbits.

Researchers who worked on the project have thus far presented three papers on the findings and are preparing to submit three others to the Journal of Forensic Sciences for review.

UT’s “Body Farm” has gained notoriety as the first outdoor laboratory in the world to study human composition.

THIS STORY WAS FIRST PUBLISHED ON Crime Feed.

7 Wrongful Conviction Cases That Resulted In Decades Behind Bars

More Evidence That A Life Of Crime Is Truly Exhausting