We asked Leslie Alan Horvitz, author of over thirty novels, including the gripping bio-thriller SynBio, to discuss the books that inspire him to write. He responded with a set of classics as distinct and inventive as his own work. Prepare to update your must-read list.

Years ago I was on a press tour of the Culinary Institute of America which is housed in a former monastery near Hyde Park, NY. Lunch was waiting for us on the banks of the Hudson – a sumptuous feast which consisted of several fantastic meat and fish dishes as well as heaping salads plus a variety of outstanding vintage wines. Frustratingly, there was no way of sampling it all. I feel much the same way when asked to choose five novels among the scores that have inspired, moved and influenced me.

Tropic of Capricorn, by Henry Miller

The first novel of Miller’s I ever read. It’s a coming of age story of sorts in which Miller, fed up with his job at the Cosmodaemonic Telegraph Agency (Western Union), finally quits, telling his boss exactly what he thinks of him. He hasn’t a dime to his name – but he doesn’t care. But even broke in New York City, he has his freedom. With nothing left to lose, he decides to try his luck in Paris. The prose is intoxicating, the voice as unforgettable as it is inimitable, and there’s not a word in it that’s politically correct.

An unassuming gardening reporter for The Daily Beast, a major London newspaper, is assigned to cover a bloody conflict in Africa because his name is the same as a noted war correspondent. Improbably, he gets the scoop anyway, showing up veteran reporters posted to the war-torn country. Based on Waugh’s own experience covering the Italian invasion of Abyssinia, this novel is probably still the most scathing satire of journalism ever written.

Journey to the End of the Night, by Louis-Ferdinand Celine

When I first read Celine’s Rabelaisian extravaganza many years ago it hit me with the force of a revelation – or maybe a sledgehammer. It’s an incendiary device disguised as a novel. Even in translation, the words practically explode on the page. 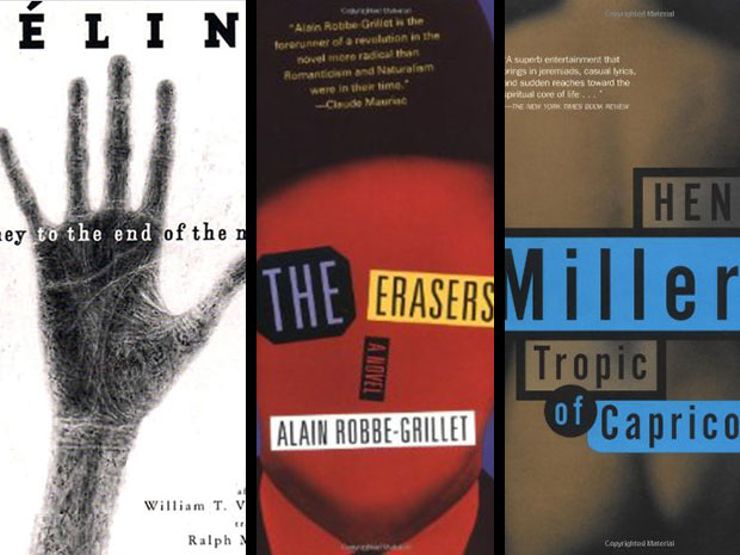 The Erasers, by Alain Robbe-Grillet

The late French novelist Robbe-Grillet liked to mess with readers’ heads. He played tricks that might once have seemed experimental and mind-boggling, but now probably seem tired and pretentious. All that said, I still can’t shake the spell of dread he created in the novel, his first and probably his most conventional, in which he turns a detective story on its head and offers a new twist on the Oedipus myth; a police detective accidentally ends up killing the man whose murder he’s investigating.

The Quiet American, by Graham Greene

A story of duplicity, passion and hubris set in post-colonial Vietnam, this is one of Greene’s best and certainly his most prescient; he understood far better than most policymakers in Washington the tragic consequences of U.S. intervention in Indochina. This novel, like many of Greene’s, can be read as a murder mystery or an exotic thriller, but on a deeper level, it’s also about a doomed love affair, in which the British narrator and a CIA agent (the quiet American of the title) both covet the love of a Vietnam beauty. Ultimately they both lose her, but of course she – and her country – was never theirs to begin with. If I had to choose one author who inspired me it would be Greene.