An Excerpt From Hollywood North

The second chapter of Michael Libling's stunningly gritty novel, Hollywood North, which we're laying out for you below, takes readers through an unexpected Hollywood. Unexpected in that it's Trenton, Ontario, otherwise known as "Hollywood North," hence the name.

Many think of Hollywood, California as being the beginning and end of film production, but that couldn't be further from the case, especially with financial fluctuations pushing the industry into as many pockets of the reachable world as they can get to in an attempt to save a buck. But, Hollywood, be it in California, or Canada, isn't all starry eyes and light reflective blonde hair. Where there are dreams, there are also often nightmares, which you'll see in Libling's chapter below.

Subscribe to our newsletter to keep up with all the latest spooky book buzz.

Jack made the front page of the Trent Record every time.

On school days, boiled eggs, toast soldiers, and the paper were my breakfast, and my mother kept watch to ensure I digested all.

On weekends, it would be Rice Krispies and the paper, which happened to be the same breakfast Winston Churchill’s mother gave him.

Either way, Mom promised, “You’ll look back on this one day and thank me.”

I have never stopped looking back. It’s the thank-you that’s been tough.

My mother was like most mothers. She believed me to be a better person than I would ever know myself to be.

The news was local. Fires. Fender benders. Drownings. Fires. Drownings. Public intoxication. Fires. Drownings. Pee Wee hockey. Fires. I skimmed the pages, bluffed interest with an intensity that swelled Mom’s heart. Oh, I was good, all right. She’d get downright soppy as she gushed to friends about her wonderful son and his passion for the world about him.

“So much like his dad, you have no idea.”

Had she quizzed me, she’d have seen I retained no specifics, save for the life and times of Superman, Beetle Bailey, Mandrake the Magician, and Jack Levin.

We were spiritual bookends, Jack and me. He found things. I wanted things.

“Quite the adventurer, isn’t he?” Mom observed from her post behind my right shoulder. It was Jack’s debut. The meteorite story. June 1958.

“You can tell even now he’s going to be a somebody. Just like you.” My mother’s endorsement of Jack should have had me running the other way. Her previous candidates for playmates had been footnotes from The Book of the Damned.

“You can learn a lot from older friends. Look at me and Dottie.”

Mom and Dottie Lange worked at the Unemployment Insurance Office. They would remain best friends until the day Dottie’s body washed up on the rocks below Dam #1.

My mother had it wrong, of course. Jack was already a somebody. I was only a year younger than Jack, but from the first photo I saw of him he struck me as heroic, as if he himself had grabbed the comet’s tail, hopped aboard, and chiseled out his prize. It might’ve been his smile, a cryptic quirk suggestive of more daring feats to come. He was squatting, pointing to the spot where the meteorite had been discovered, yet I would’ve bet you a million the photographer had tied him down to get the shot, Jack’s unruly hair a stirring glimpse of anarchy in a town torn between Brylcreem and brush cut.

The town was Trenton. Still is.

The Ontario Trenton, not the New Jersey one.

Look for Rochester on your map and it’s an inch straight up, an aberrant speck of chronic self-deception on the north shore of Lake Ontario, toward the western tip of the Bay of Quinte. Pronounced kwin-tee, the inlet is as perfect a Z as God has carved. Left to me, it would’ve been the Bay of Zorro.

The Trent River splits the town up the middle. Three bridges span the gap, two for cars, one for rail. There used to be a footbridge, too, but it collapsed in ’64, killing Jimmy Campbell’s mom and her beagle. Jimmy, himself, was famously dead eight years by then, his windpipe crushed by the school’s monkey bars.
Besides outdoor enthusiasts and firebugs, Trenton is also popular with the British Royal Family. Queen Elizabeth has turned up a bunch of times. As a kid, I stood by the roadside and waved to her, and she waved back—though her hand never moved much, like she had a backscratcher up her sleeve.

You might have heard of the town. In 2010, Trenton had a serial killer. The commander of the nearby Air Force base, no less. A colonel. I’m not kidding. The guy had even piloted the Queen’s plane a few times. The Prime Minister’s, too. Again, I’m not kidding. You can look it up.

These days, the Killer Colonel pretty much sums up what most people know about Trenton and this includes the people who live there. I do not hold it against them. Nobody knew much in my day, either. And those who did weren’t big on talking. I don’t blame any of them. Look how long it’s taken me to open up.

From the beginning of me I sensed the town would be the end of me. I saw neither streets nor avenues, only dead ends and dead endings. While other kids made do with stamps and coins and baseball cards, I collected fears. The biggest was that my mother would die and leave me on my own. Not that orphanhood wasn’t entirely without appeal.

Rusty on Rin Tin Tin. Corky on Circus Boy. Joey on Fury. That mopey kid from A Dog of Flanders. Orphanhood was the best thing to have happened to them. I just didn’t have it in me to commit. Maybe if I’d had a dog or a horse. A baby elephant…

“Libling’s assured, quietly menacing debut [is] based on his World Fantasy Award–nominated novella of the same title. . . . Fans of Stand by Me and the like will find much to enjoy.” —Publishers Weekly 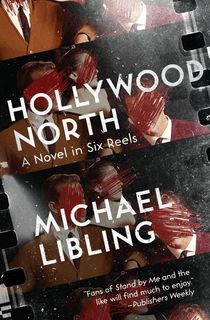