It’s not all rolling hills and peaceful seaside villages on the Emerald Isle.

From a pair of scissor-wielding sisters in Dublin to the strange disappearances in the Wicklow Mountains, check out these killer true crime titles of Ireland’s most heinous acts.

The Framing of Harry Gleeson
By Kleran Fagan
In 1941, Harry Gleeson was hung for the murder of his neighbor Moll McCarthy, a young, unmarried mother. More than 50 years later, Moll’s daughter Mary, nearing her own death, stated: “I saw my own mother shot on the kitchen floor, and an innocent man died.” Fagan explores how an innocent man could be killed for a crime he didn’t commit, while the actual murderers – ex-IRA men – were never considered suspects.

Missing: Ireland’s Disappeared
By Barry Cummins
The five women and two children spotlighted in this true crime compilation were made famous by the brutality and mystery of their unsolved disappearances. Cummins thoroughly examines each case and with the help of police and surviving family members, provides insight into Ireland’s eeriest cold cases.

Where No One Can Hear You Scream
By Sarah McInerney
You aren’t going to want to visit the Wicklow Mountains after reading this book that chronicles several known murders and disappearances committed in the area. Nearly 50,000 acres of dense woods and rocky hills lie between the counties of Dublin and Carlow. The area is rife with isolated spots for contemplation – or violent crimes. McInerney vividly recounts many of the known cases connected to this mysterious region. 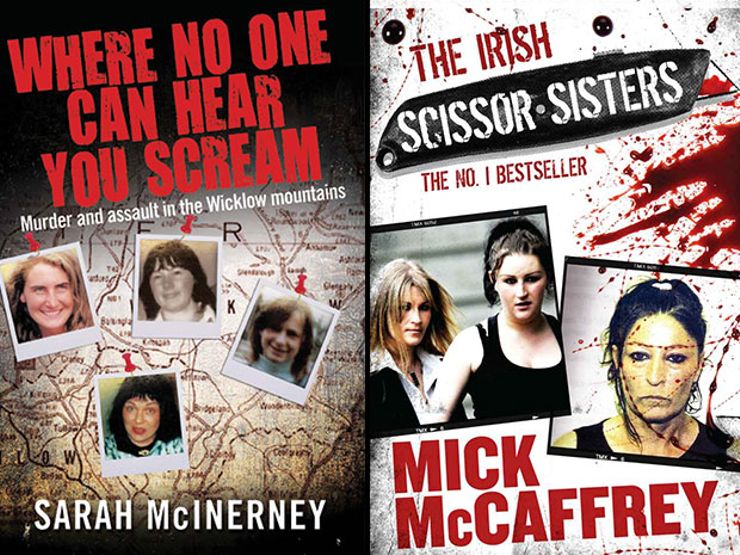 The Irish Scissor Sisters
Mick McCaffrey
In 2005, Ireland – and the world – was shocked by the story of two sisters who brutally murdered their mother’s lover. Nicknamed the “Scissor Sisters,” the women spent hours butchering their victim, before dumping the many pieces of his body in Dublin’s Royal Canal. McCaffrey digs into the gruesome details, unfolding a narrative that is chilling and ghastly. For another version of the same grisly story, check out John Mooney’s The Torso in the Canal.

Blood Ties
By Niamh O’Connor
If your interest is piqued by the Scissor Sisters, check out an exclusive interview with Charlotte Mulhall – one of the deadly siblings – in this true crime compilation by Niamh O’Connor. The interview joins other stories of familial crime that will change your perspective on the concept of “family blood.”

The Black Widow: the Catherine Nevin Story
By Niamh O’Connor
Also by O’Connor, The Black Widow gives the full story on the famous case of Catherine Nevin, who was accused and convicted of murdering her husband. At his funeral, Nevin held a single rose – the picture of a grieving widow having lost her love. Four years later, she stood quietly before a judge as she was found guilty of his murder and three counts of soliciting others to murder. O’Connor dives behind the scenes, analyzing the life and mind of this seemingly harmless woman who was willing to do whatever it took to get what she wanted.