It's the country's biggest crime and mystery convention. Here's how to make the most of your time.

Here’s the funny thing about Bouchercon: It’s the year’s biggest crime and mystery convention, where you’re surrounded by writers who often go to deep, dark places in their work — and everyone is just so damn nice.

I have a theory about this. Crime writers get it out on the page. Writing is about catharsis, right? Exorcising demons? Once you plumb those depths, it’s nice to get out in the sunshine and have a little fun.

Luckily, this year’s Bouchercon was in Long Beach, California. A far cry from last year’s convention, which was held in Albany, New York, a town that looks like the abandoned set of a B-grade dystopian flick — a lot of gray sky and concrete.

This was my second Bouchercon, and I was excited to see some friends, reconnect with people I had met last year, and apply some of the lessons I learned during my first rodeo.

So now that I’m a convention vet (ha!), I thought I’d share some of what I learned about surviving conventions like this.

At my first Bouchercon, I went the whole first day without drinking any water. My hangover on day two persisted until the early evening. This year, I forgot to eat dinner one night. With the time difference and the heavy restaurant meals, it’s easy to get sidetracked. Remember, your body has already been hammered by travel (unless you’re lucky enough to be a local). Be smart. And pack some aspirin, just in case.

I often forget these. Carry your business cards everywhere. And a pen. Don’t forget a pen. Sooner or later you’re going to need to jot something down, and honestly, it’s a little embarrassing to be a writer caught without a pen.

You’re going to want to go to a million panels. But you’re going to find so much cool stuff happening at the same exact time, it’s hard to keep up. And then you’ll be heading to one panel and see someone and suddenly you’re making lunch plans. It’s chaos. Roll with it and have fun. Just make sure you’re carrying a copy of the schedule — or download the Bouchercon app.

4. After hours, head for the hotel bar.

This is where deals get done and new friendships get made. Even in Albany, where conventioneers were spread among several hotels, there was still one “official” hotel bar.

Don’t spend your whole trip at the convention. Go out, stretch your legs. On a quest for contact solution, my compatriots and I saw a man in a wizard’s cloak, followed shortly by a guy with two humongous iguanas in the basket of his bike. One of us will, no doubt, sneak these details into a short story somewhere down the line.

There are not a lot of egos on display at conventions like these. People who are there expect to be interacting with people. So if you see an agent or an editor or a writer you’re a fan of, say hello. Don’t be scared! 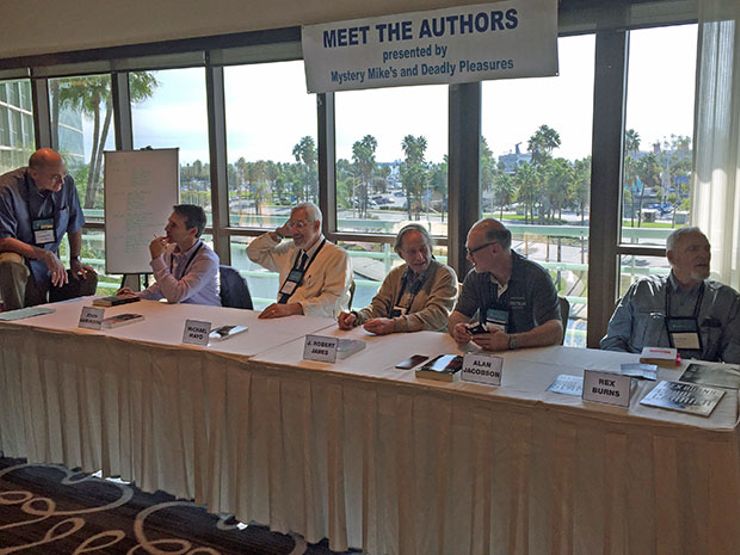 No excuses; nearly everyone carries a camera-phone on them these days. Take advantage of this brave new world and document the proceedings. You never know when you’re going to be asked to write about the experience for a website and then find you don’t have a lot of art to accompany it. Cheers to Blood Always Tells author Hilary Davidson, whose husband Dan took the above photo.

You’ll spend so much time walking, your feet will ache (my iPhone told me I walked seven miles on a day I barely left the hotel). You’ll talk so much you’ll lose your voice. Take a little time to relax. I brought my laptop so I could keep up on work emails and get some editing done on my next book. You’d be surprised at how a little productivity can foster a second wind.

You’re going to come home with a lot of books. Make sure you’ve got some extra room in your suitcase.

Staying in the convention hotel is nice. Especially at the end of the night when, in a haze of exhaustion, all you’ve got to navigate are the elevator buttons. The earlier you can get in there, the better.

Speaking of, next year’s Bouchercon will be held in Raleigh, North Carolina. (Details here.) Hopefully this rundown will make it a little easier if it’s your first. Though, at the end of the day, there’s really only one bit of advice that matters: Have fun.

Rob Hart is the associate publisher for MYSTERIOUSPRESS.COM and the class director at LitReactor. He’s the author of The Last Safe Place: A Zombie Novella, and his short stories have appeared in publications like Thuglit, Needle, and Helix Literary Magazine. His debut novel, New Yorked, will be released in June 2015. You can find his website at ROBWHART.COM.